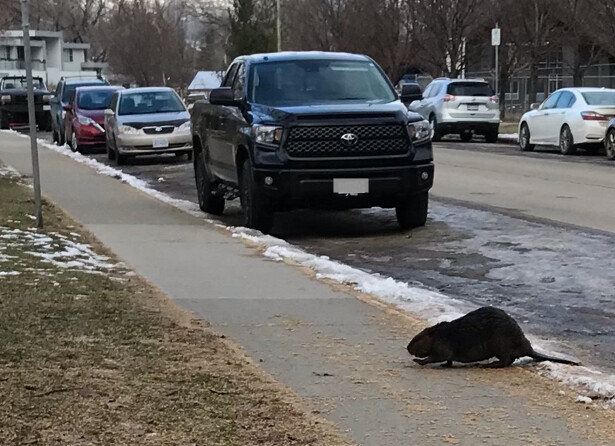 A Kelowna man spotted an unusual sight on Sunset Drive this week.

Brian tells Castanet he lives in North Glenmore but walks down to the water most days, but in all of his years doing the walk, he says he's never seen a beaver crossing the road.

"He was a giant beaver too. There were other people there who said they'd never seen a beaver there either."

The eager beaver was crossing Sunset Dr. heading towards Okanagan Lake when Brian snapped his photo.

"He was just cutting across the road, there's a creek on one side of the road and he just jumped into the bird sanctuary pond. We watched it swim across the pond."

According to the Nature Conservancy of Canada, beavers are the largest rodent in North America. An adult beaver can weigh up to 32 kilograms and measure up to 1.3 metres long — including its tail.

Beavers mainly eat tree bark and can be found all across the country and have been considered Canada's national icon for almost 300 years.

This is also mating season for beavers and they remain active throughout the winter months. Beavers can swim under the ice and are able to hold their breath underwater for up to 15 minutes.