Okanagan snowpacks below normal despite icy winter so far 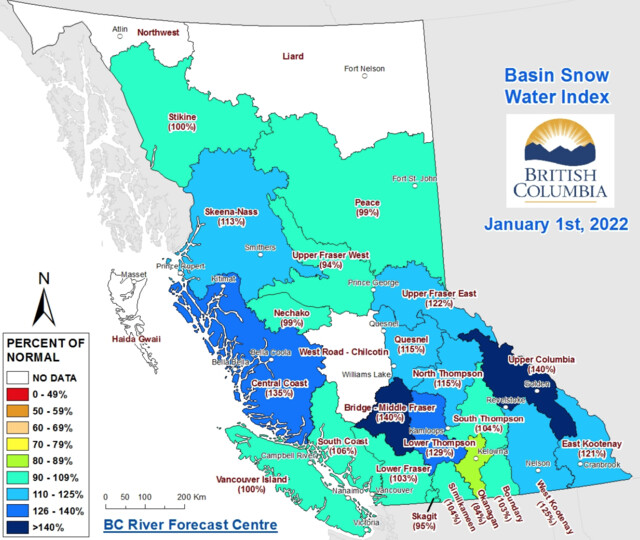 Despite heavy snowfall in the valley bottom this winter, the Okanagan is reporting a below normal snowpack.

Most of the other river basins in the Southern Interior are above average for this time of year, according to the BC River Forecast Centre.

Near normal snowpacks are being reported in the Boundary, Similkameen and South Thompson.

The Lower Thompson basin, however, is reporting a 129 per cent of normal snowpack. Elsewhere in B.C., the Central Coast, Middle Fraser and Upper Columbia are also seeing elevated snowpacks.

The River Forecast Centre says snowpack developed early this year because of multiple storm systems affecting the province beginning as early as mid-September.

"A very strong and relatively warm atmospheric river in mid-November resulted in a rain-on-snow flood event that reduced snow pack at many south coastal locations and lower elevation snow stations in the South Interior."

"Another series of atmospheric rivers in late-November contributed to both snow accumulation and melt along the coast. By December 1, the average snow pack observed at automated snow weather stations across British Columbia was 131 per cent of long-term median. During the final month of 2021, snow continued to accumulate, especially at lower elevations," the Forecast Centre said.

The Climate Prediction Center is forecasting that La Nina conditions will continue through the winter. La Nina occurs when oceanic temperature anomalies along the equatorial Pacific Ocean region are below normal for an extended period, causing cooler and wetter weather.

The provincial average for all snow measurements across the province is 115 per cent of normal and indicates a higher risk for snowmelt related flooding during the spring months. But with three or more months left for snow accumulation, the River Forecast Centre says seasonal snow packs can still change significantly.