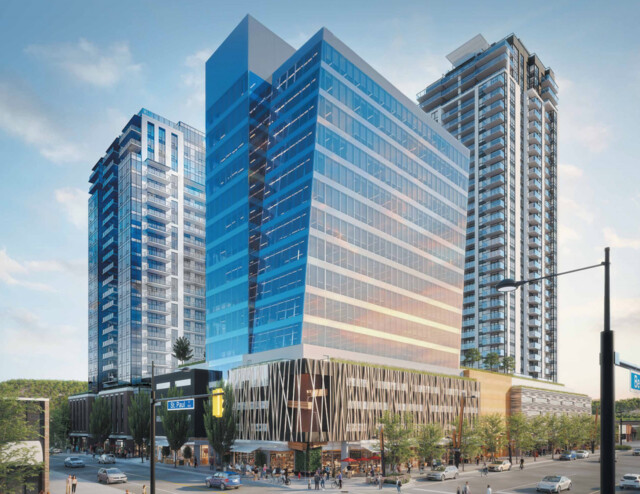 Photo: Contributed
An image of what Bernard Block will look like when complete. The Brooklyn tower is on the left.

The crane that collapsed Monday morning in downtown Kelowna was working on the first of three towers for Mission Group’s Bernard Block project, which broke ground in 2019.

That tower is the 25-storey, 178-unit Brooklyn at Bernard Block, whose top floor had its final concrete pour in February. The building will feature Kelowna’s highest rooftop terrace and will also boast retail space at street level.

Brooklyn was originally scheduled to be ready for residents in early 2021, but no new opening date has been released.

The other two towers scheduled to go up on the site of the former Bargain Shop on Bernard Avenue are the 34-storey Bertram at Bernard Block and The Block, a 13-storey commercial building.

Mission Group earlier this year used an innovative piling technique to start the foundation of the Bertram tower, which is scheduled to be ready for late 2023 or early 2024. It will feature a rooftop pool, hot tub, community garden, outdoor sports area, indoor gym and main floor shared workspace.

Mission Group, which is a Kelowna-based development company, bought the Bernard Avenue land in 2017.