A Kelowna RCMP officer is now facing an assault charge after an investigation into a punching incident in downtown Kelowna almost a year ago.

The BC Prosecution Service announced Wednesday that a charge of assault has been approved against Const. Siggy Emmit-Steven Pietrzak in connection with the arrest of a suspected impaired driver in Kelowna on May 30, 2020.

BC Prosecution Service spokesman Dan McLaughlin said that the charges were approved by an experienced Crown prosecutor, "with no prior or current connection with the officer."

In a separate statement, the BC RCMP said the findings of the investigation into Pietrzak's actions were reviewed by an outside police force before they were handed over to the Crown.

Tyler Russell filed a lawsuit in June of 2020 after cellphone video published by Castanet showed him being punched in the face multiple times by Pietrzak while two other officers held his arms.

The federal government filed a detailed response to the lawsuit, alleging Russell did not have permission to be driving the company vehicle he was in prior to his arrest and claiming he was in possession of drugs.

The court filing offered a full-throated defense for the actions of Pietrzak and other responding officers.

Regardless, the single charge of assault has been laid with a first court appearance set for May 3.

McLaughlin tells Castanet, "as this matter is now before the court the BCPS will not be releasing additional information or commenting further at this time." 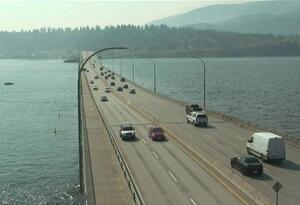