Doug Crawford says he lost $10,000 in a cryptocurrency ponzi investment scheme, allegedly brought to him by a Kelowna man who he has known for 20 years.

The RCMP is warning to the public about cryptocurrency fraud, which is dramatically on the rise in Canada.

According to police, in the first eight months of 2020, Canadians lost nearly $11 million through digital currency scams alone. A few short years ago, reports of frauds involving cryptocurrencies numbered in the mere hundreds and now they are over ten times that amount.

Cryptocurrency’s biggest selling point – its ability to move large sums of money without banks or financial institutions – also makes it a prime tool for scammers.

The transfer of cryptocurrencies like bitcoin are nearly impossible to trace and can be cashed out nearly anywhere in the world, making prosecutions difficult.

The Okanagan is no exception. Crawford says he was the victim of a local cryptocurrency scam.

"If it was somebody that I had no relationship with or didn't know or called me over the phone from a different country, I never would have done it," Crawford explains.

"But this is somebody that I've seen face-to-face..." he continues. The company is called Beurax, and it claims its headquarters are located in Australia.

The investment promised to give interest back everyday that can either be withdrawn or reinvested. When Crawford went to withdraw his money, he was blocked from it.

Right away, Crawford saw the red flags. He contacted the alleged scammer and asked for his money back.

Castanet contacted the alleged scammer and he has not responded. Doug has now filed a claim with the British Columbia Securities Commission, the RCMP, and he has hired a lawyer. The BC Securities Commission told Castanet they cannot speak about it, but they directed us to their investment caution list which warns the public about Beurax.

Securities.io reported this week that the company appears to be the front for a cryptocurrency ponzi scheme.

"Scammers don't always come in the form of a CRA phone call. Sometimes it looks like a friend, sometimes it's an acquaintance, it's a best friend, it's somebody that you trust," Crawford warns.

Since he confronted the alleged local scammer, the Beurax site is gone and a new similar scam has popped up in the Okanagan.

For more information on scams, and additional ways to protect your money, go to the Canadian Anti-Fraud Centre website. The U.S. SEC has info on how to avoid cryptocurrency ponzi schemes here.

Earlier this week, police in Calgary announced charges against a Summerland, B.C. couple for allegedly operating a million-dollar ponzi scheme. 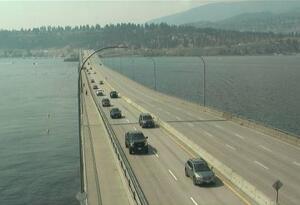