The final concrete pour of The Brooklyn development downtown Kelowna took place Monday and the project is a first of its kind for the city.

It’s no secret that Kelowna is growing and as the population rises, the demand for taller towers is also increasing.

Crews at Pump Pro Concrete Pumping started working on The Brooklyn on St. Paul Street in May 2020, using a concrete placing boom - making it the first high-rise building in the city to use this specialized piece of equipment.

“Typically on a project like this, they’re going to use a crane and bucket to lift the concrete up. We bring in a pump truck and a boom that goes up top. It increases the speed of the pour greatly - saves a lot of time and money,” explains owner of Pump Pro Concrete Pumping Gavin Johnston, who founded the company in 2008.

“It also allows the crane to do other tasks while we’re pouring the concrete. [It] uses a big hydraulic pump at the bottom and it pushes it all the way up through a pipeline and then through the boom at the top and precision places it once it comes out the end of the boom.”

Normally seen in larger cities, the concrete placing boom increases productivity, efficiency and the quality of the final project when doing cast-in-place concrete.

“I compare it [to] the difference between a teaspoon and a firehose when comparing it to a crane and bucket. Of course it takes time to lift those buckets up as they don’t carry very much, whereas the pump continually pours and has a consistent pour rate,” says Johnston.

“We’re all really proud to be a part of building this amazing community. We’ve spent a lot of time and energy working on this project, preparing for it, setting it up. We all feel a lot of pride in this and we’re just happy to have it getting completed successfully.”

The project has also broken a record for construction in Kelowna.

“We’re actually breaking a record today for the most vertical feet ever pumped for concrete in Kelowna. We’re going up over 300 feet today so it’s a new record, it’s never been done here before. We’re pretty excited about that,” says Johnston.

Pump Pro Concrete Pumping says the red and white concrete placing boom is a symbol of Kelowna’s growth and future potential and they are looking forward to using it on more projects like the new Landmark 7 building and new Bertram Tower.

Click here to view the full video of the concrete placing boom used at The Brooklyn. 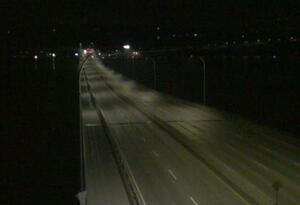