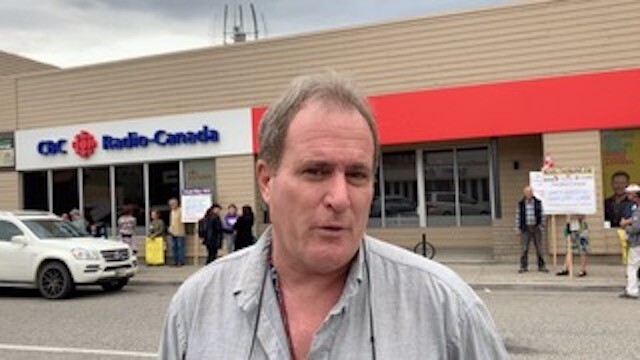 When hundreds of people gather in Kelowna’s Stuart Park each week to protest COVID-19 restrictions, it’s a familiar group of faces who take the microphone.

But no face is more familiar than David Kevin Lindsay, the man who has been leading Kelowna’s anti-mask and anti-lockdown movement since its infancy.

While COVID-19 is less than a year old, this is familiar territory for Lindsay, who for decades previously made a name for himself within fringe groups by arguing that taxes are unconstitutional.

Previously, he charged for access to his seminars on how to challenge tax law and at one time advertised himself as “Canada's foremost freedom expert on the secrets of laying criminal charges against government officials.”

It is a business model he had adopted to cater to COVID-19 conspiracies, charging $25 for an online seminar on Sunday where he promised to provide “today’s answer to the COVID-19 insanity.”

Lindsay was profiled in Meads vs. Meads, a 2012 ruling from the Alberta Court of Queen’s Bench, which was an unprecedented 736-paragraph decision from a judge that has acted as a guide for courts across the country on how to deal with “Organized Pseudolegal Commercial Arguments.”

The judgment lists Lindsay one of Canada’s top OPCA “gurus,” a prominent member of the OPCA community who sells their ideas in seminars or acts as an agent in court to make bogus arguments to avoid paying taxes, child support or paying speeding tickets. Lindsay, while not a lawyer, represented dozens of people in court making such arguments.

“This is a business where secret ‘cheat codes’ and ‘get out of jail free’ cards are marketed to a gullible, often conspiracy-driven, customer base,” wrote Donald Netolitzky, complex litigant management counsel for the Alberta Court of Queen’s Bench, in the Alberta Law Review about OPCA gurus generally.

At an anti-mask and anti-lockdown event in the summer, Lindsay was introduced as appearing in court more than 300 times in seven provinces.

When he was hauled into court in 2008 after not filing a tax return in more than a decade, he tried to argue that Queen Elizabeth II did not correctly complete her coronation oath in 1953, resulting in a lack of constitutional authority in Canada’s Parliament and, as a result, the Income Tax Act.

He also unsuccessfully challenged the authority of the judge and demanded to cross examine him.

Lindsay was sentenced to 150 days in jail and fined $5,000. The BC Court of Appeal would lower the sentence to 30 days in jail while maintaining the fine. He tried to take the case to the Supreme Court of Canada, but the court refused to hear it.

He would serve 60 days in jail in December 2012 for failing to follow the ensuing court order requiring him to file his taxes for the years 1997-2001.

Lindsay has also attempted to argue in court that the relationship between the state and a person is a contract that can be opted out of and that an aspect of the 1931 Statute of Westminster meant all post-1931 government legislation and action is unauthorized.

When he was caught driving without a driver’s licence, without insurance, and without displaying proper licence plates in 2001, he tried to argue that King John’s Magna Carta of 1215 supersedes modern law.

Lindsay started his OPCA activities in the late 1990s in Manitoba, but eventually settled in the B.C. Interior where he became “ubiquitous” in the detaxer movement and founded his “Common Law Education And Rights” (CLEAR) initiative.

Under that brand he has hosted and charged for entrance to seminars on how to “avoid being a natural person,” on how “all taxes are voluntary” and “how to file criminal charges when the police won’t.” COVID-19 is just the latest seminar topic for Lindsay under the CLEAR banner.

It’s under that same brand that Lindsay has spread pamphlets across the Okanagan containing misinformation related to COVID-19, held protests at news outlets and outside schools, and become the leader of weekly anti-lockdown rallies in Stuart Park.

The Kelowna RCMP says it issued the organizer of Saturday’s large downtown protest a $2,300 ticket. Longtime ally of Lindsay and white nationalist, Paul Fromm, identified Lindsay as the receiver of the penalty on his website Sunday night. Lindsay confirmed Monday he received the ticket, suggesting he will fight the penalty in court. 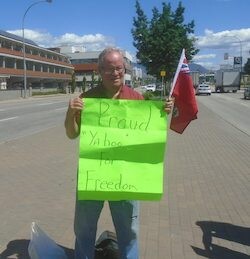 Fromm has appeared at multiple of Lindsay’s rallies in Stuart Park, promoting them on his channels and attending early in the movement when they attracted just a few dozen people.

Lindsay’s association to Fromm is not new. Lindsay was one of many fringe characters who travelled to Quesnel to attend the 2015 trial of Arthur Topham, who was convicted of communicating online statements that wilfully promoted hatred against Jewish people.

Outside the Quesnel courthouse, Lindsay complained to Fromm in an interview about the routine searches of attendees carried out by sheriffs at the courthouse, falsely claiming they were illegal.

With several hundred people from across the B.C. Interior attending the last few Kelowna anti-lockdown rallies, the views of Fromm — one of the Canada's most prominent white nationalists — do not reflect the vast majority of attendees. But Lindsay has refused to answer questions on his relationship with Fromm.

"As you can see, there are a significant amount of angry people in relation to the COVID CON," said Lindsay in a lengthy email to Castanet that attacked the provincial statistics on COVID-19 as "completely false and misleading" while threatening additional protests at Castanet's Kelowna offices.

"For every person in attendance, there are many thousands not in attendance due to fear of losing their jobs and other public retribution and fear for their families. Canadians are living in fear of the state – that is not freedom – that is tyranny," Lindsay continued.

"What you should be focusing upon is the nature and accuracy of the information we possess (as do many others) that confirms that there is no pandemic," he said, while rejecting the term "conspiracy theorist."

Lindsay also refused to answer questions about whether he now files taxes, or if he will return to the detaxer movement when the pandemic ends.

Most of Lindsay’s speeches at anti-mask and anti-lockdown rallies remain focused on the pandemic rather than his previous legal adventures, but some of his followers remain under the impression that he is a lawyer.

“The man David Lindsay, the head of C.L.E.A.R. in Kelowna, is a lawyer – by the sounds of it a really good one,” said one of Saturday’s rally attendees, Marjorie Paulson, on Twitter. “A wealth of knowledge and information is on our side.”

While he may be very familiar with the inside of a courtroom, the BC Court of Appeal ruled in 2007 when it declared Lindsay a vexatious litigant “that almost all of the applications Mr. Lindsay has made on his own behalf have been without any merit and so found by the courts who have considered them.” 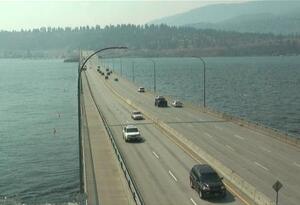