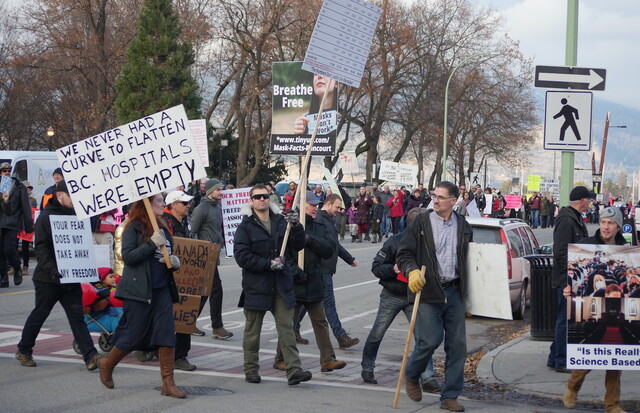 The organizer of Kelowna's protest against COVID-19 measures was handed a $2,300 fine Saturday.

For months, the group has held similar rallies every Saturday afternoon in Downtown Kelowna, with the number of participants increasing every week. Saturday's event saw hundreds of people march through the streets of downtown, ending at the corner of Abbot Street and Highway 97.

On Sunday, Cpl. Jocelyn Noseworthy of the Kelowna RCMP said the “self-identified organizer” of the event was issued a ticket for violating the Gatherings and Events Order of the COVID-19 Related Measures Act, which carries a $2,300 fine. The RCMP did not name the person who was handed the fine.

A number of RCMP officers were on scene Saturday, blocking traffic as the protesters marched through the streets.

“Frontline officers of the Kelowna RCMP were present to ensure the safety of the protesters and the rest of the public,” said Cpl. Noseworthy in a statement.

“This was a march that crossed several busy downtown core roadways and our police officers were on hand to maintain the peace and help to prevent any confrontations between those actively participating in the demonstration and both the motoring public and area residents.”

In her statement, Cpl. Noseworthy recognized the public's right to lawful protest.

“The RCMP must use discretion when balancing a citizen’s rights with the current potential health risks associated to large public gatherings,” she said “However, if the activities being engaged in are in violation of the provincial Public Health Order, those involved can face fines.”

A similar fine was issued to the organizer of a protest in Dawson Creek Saturday, while two $2,800 fines were handed to protest organizers in Regina.

B.C.'s Gatherings and Events Order restricts all gatherings of people both outside and inside, save for a select few exceptions, like small weddings, baptisms, and funerals.

“Public safety is a priority for the RCMP and we encourage everyone to adhere to the orders being implemented to keep everyone safe and reduce the risks,” said Supt. Kara Triance, Officer in Charge of the Kelowna RCMP.

“While we certainly can, and will enforce the provisions available to us under the COVID Related Measures Act, we continue to encourage everyone to voluntarily comply with the provincial health orders, so enforcement is not required.”

Last week, 106 British Columbians died from COVID-19, while 4,665 new cases were identified across the province. 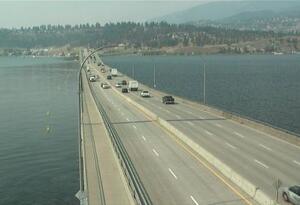