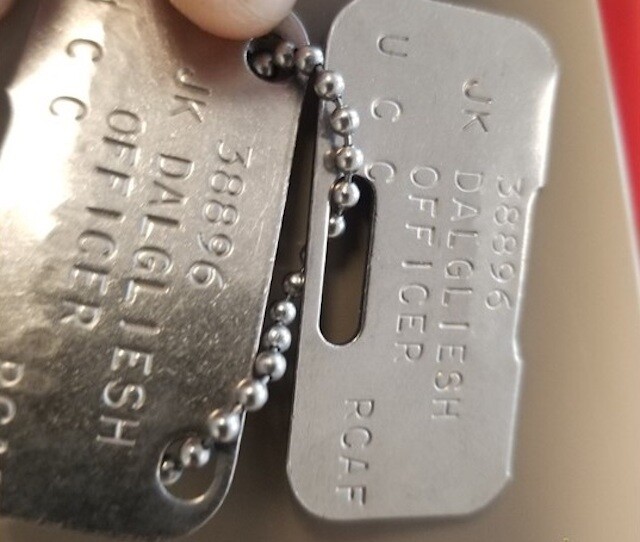 With Remembrance Day just around the corner, the Kelowna RCMP is sharing a story about an investigation earlier this year that reunited a veteran’s dog tags with his family.

A set of RCAF dog tags were found near the intersection of Highway 33 and Dougall Road N in Kelowna on Aug. 25, 2020. The name on the tags, J.K. Dalgliesh, didn’t result in any leads when run by police in their system, so a police officer called the Kelowna War Museum.

A staff member of the museum was then able to determine that the initials stood for John Kenneth.

J.K. Dalgliesh served in the European theatre in World War II with the Royal Canadian Airforce as a navigator with heavy bombers. His career with the military continued after the war as a Squadron Leader and Training Command Legal Officer in Weyburn Saskatchewan through to 1961. That year, he was appointed Judge Advocate General with National Defense Headquarters. In 1966 he was transferred to Esquimalt as a Wing Commander and Judge Advocate General for the Western Region. Dalgliesh and his family lived on and off in the Kelowna area, and he was buried here in 1981.

Reach led the RCMP to J.K. Dalgaliesh’s daughter, who now lives in Calgary. The family has no idea how or when the dog tags were lost, but his daughter was delighted to have them returned.

“In the scope of our responsibilities as police officers, this file doesn’t seem like a big deal,” says Supt. Kara Triance, commander of the Kelowna Regional RCMP. “But being able to return a part of a family’s history to them is a small act of kindness that brightens everyone’s day — especially as we approach Remembrance Day. We commend our officer for his dedication on this investigation, and we’d like to thank our partners at the Kelowna War Museum for all their assistance.” 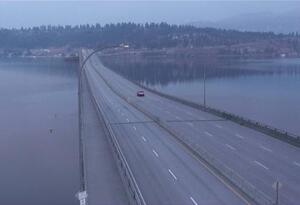