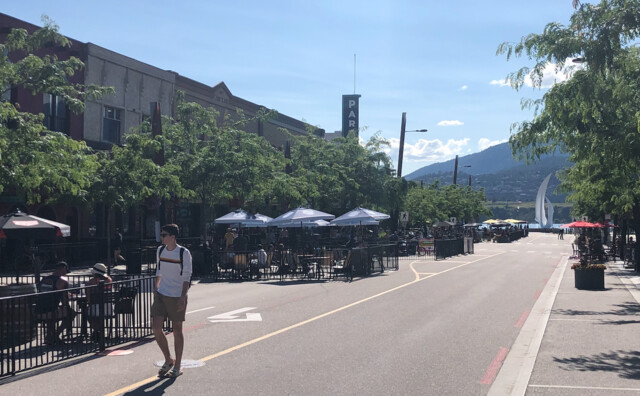 Following an exposure event in Downtown Kelowna over the past several weeks that's resulted in 17 confirmed cases of COVID-19 so far, Dr. Bonnie Henry is stressing the importance of following the rules when going out to restaurants and bars.

The recent exposure event in Kelowna stemmed from a group of seven people from the Interior Health region, Alberta, and the Lower Mainland, who all met in Kelowna. Between June 26 to July 9, people who later tested positive for the virus attended local private parties, along with restaurants and bars in the downtown area.

It's obvious to those who've visited Kelowna's downtown core over the past several weekends that the summer tourist season is in full swing, with lengthy wait times to get into many restaurants and bars. Provincial guidelines still stipulate diners have no more than six people in their group, while maintaining at least two metres from other parties.

“People need to be on their best behaviour, they need to follow these rules. It's for your safety, as well as for the safety of people who work there,” Dr. Henry said Tuesday.

“It's a very challenging situation. I've had some conversations with restaurant employees and owners about this where people come in with a group of 20 and want to sit at several tables together and that is a risk to people who are working in that environment. There's reasons why we have these smaller numbers right now.”

Dr. Henry said it's important that the hospitality industry is able to operate safely.

“The last thing we want is to have transmission going on places like restaurants and bars and nightclubs, or at resorts and parties, because we need to keep those businesses going, we need to give outlets for people to go out there.”

Dr. Henry said staff at restaurant and bars can contact WorkSafeBC if they have concerns about their work environment, and members of the public can contact their local public health with any concerns.