If you're heading through the security gates at Kelowna International Airport, you may notice the walls now look a little brighter.

That's because it's the site of choice for Sheldon Pierre Louis' latest exhibition puti kwala – we are still here, which will stay until July 2021.

The local artist was approached by Kelowna Art Gallery in August 2019 with the idea of creating three large canvas portraits celebrating Syilx history and culture.

Louis, who is a member of the Syilx Nation, a Okanagan Indian Band councillor and community leader, had previously admired colleague David Wilson's work in the space.

He also had the opportunity to see the space on his way home from Ottawa one day, which helped him decide to move forward with the installation.

"I saw it and I said, yeah, you know, that’s actually a really awesome exhibit space. A lot of traffic, a lot of people, so I took the gallery up on their offer. About three months ago we got re-approached and they said, 'OK, you ready to go?' So essentially I started about three months ago painting the body of work."

However, given that April was at the height of the COVID-19 pandemic, Louis soon realized it wouldn't be as easy as usual to source the specific canvas sizes he wanted for the display.

"It really really threw me for a twist ... the exhibit was intended to be three 10 ft. long by 5 ft. canvases, but we couldn’t source it. Non-essential shipping was not happening at the height of COVID. Unfortunately I had to scramble around and source the size of canvases that I could, and that essentially changed the scope of what the exhibit was originally intending to be."

Instead, he spent the last three months painting six 4x4-foot canvases featuring generational snapshots, such as two nieces snapping a selfie, and a grandfather teaching his young granddaughter how to plant seeds.

Louis featured some of his extended family members and girlfriend in the artwork, which was originally intended to depict a village scene.

"As Syilx people, a lot of times people don’t realize that we have a number of communities throughout the nation here, so initially I wanted to show that we were still here. It was supposed to be a village scene of a lot of traditional activities and because of COVID, it changed, so what I did was I took a contemporary approach to it.

"I really wanted to show today, what we look like today being here, because we tend to blend in a little more. People unfortunately assume that we still live in those old age times and live in that way, so I wanted to really showcase that our culture is still alive and vibrant today in a contemporary context. Rethinking it, I really looked at the youth, knowing that the youth are really bringing back a lot of our cultural practices. The younger generation is learning from our older generation and they’re really carrying it forward."

Despite the decrease in foot traffic travelling through the airport security gates these days due to the pandemic, Louis says the exhibition is already making tracks online.

"I think it’s been getting shared around quite heavily in the last couple of days so it’s really got some traction, and everybody’s really just happy to see that we’re showcasing that our people are still here.

"Because it’s not the typical exhibit that you come in and you wander through like an art gallery, and because of COVID we don’t have the traffic that we normally would, so I think social media and the internet is going to be a big proponent to getting it out there."

Louis will speak about his artistic practice and current installation during a virtual talk on Tuesday, Sept. 1 from 12 p.m. to 1 p.m. The event is free and open to the public to attend the live broadcast online.

For more information about events and exhibitions, visit the Kelowna Art Gallery website or call 250-762-2226. 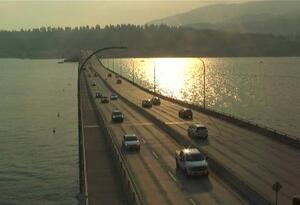