Police say they were called to the park at 2:30 p.m., near the corner of Bernard Avenue and Abbott Street, arriving to be told by witnesses that a man allegedly grabbed a small child being held by its mother.

After a struggle, the man jumped into Okanagan Lake and swam away, eventually ending up on a log boom. Frontline officers were assisted by a Kelowna Fire Department vessel and arrested him without further incident.

“It’s unclear at this time exactly what the male’s intentions were and that, of course, will be a large portion of our continued investigation,” states Cpl. Jesse O’Donaghey, spokesperson for the Kelowna RCMP. “As a parent myself, I can only imagine what would have been going through the minds of the child’s parents.”

The suspect, a 30-year-old man originally from Alberta, faces potential criminal charges. He remains behind bars and will appear in court Monday.

Police say the child was uninjured, but was examined at the hospital prior to being released. The child and their family is being supported by RCMP victim services.

O’Donaghey says they are now asking all witnesses to come forward.

“We appreciate that many witnesses may feel that police have obtained information from enough witnesses at the scene, however each and every eye witness account is helpful,” he said.

A man who is believed to have brazenly stolen a baby on Sunday afternoon in Kelowna has been arrested.

According to witnesses, a family was standing near the Kelowna Sails when a man calmly walked over to a woman holding a baby and snatched it from her arms.

The woman started yelling "my baby, my baby" at the top of her lungs and a group of people wrestled the man to the ground.

The baby was rescued, but the suspect broke free from the group, ran, stripped, and jumped naked into Okanagan Lake.

He now faces potential charges and RCMP continue to investigate.

A man allegedly stole a baby from a family at a busy Kelowna park Sunday, before jumping into Okanagan Lake to try and swim away.

Castanet News has been told by multiple tipsters about the incident that unfolded just after 2 p.m. in Kerry Park.

“A whole family, including the grandparents, were all standing right there and the mom had the baby in her arms and this regular looking guy just came up to her and literally grabbed the baby out of her arms,” said Sheridan Pimson.

She describes the man as young, blonde hair, and that he was wearing a t-shirt and shorts.

“He forcibly yanked the baby out of her arms and she immediately started screaming ‘my baby, my baby’ at the top of her lungs,” recalls Pimson.

The mother called for someone to call 911 and Pimson quickly called police.

“He had the baby in his arms, people jumped on him right away and were having a tug-of-war with the baby,” she recalls. "The guy who grabbed the baby said ‘I thought the baby was going to be hurt'."

The man was then able to break free from the group and the baby was returned to the mother.

“He ran into the water and started swimming away,” she recalls. “I was fearing he was dangerous so I ran away.”

“I want to cry just talking about it. I have a one-year-old,” she said. “It’s terrifying. I was literally planning a picnic for my family there.”

Castanet has reached out to RCMP for more details and is awaiting a response. 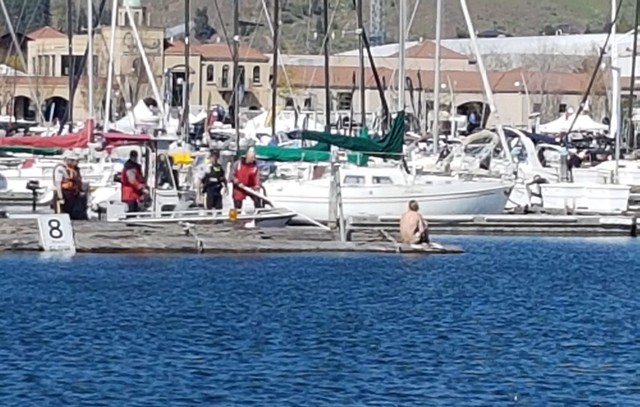 Photo: Contributed
A man jumps into Okanagan Lake after trying to take a baby from a woman on April 28, 2019.