Liberals in a fighting mood

The BC Liberals are ready for a battle.

Provincial Liberal leader Andrew Wilkinson was in Kelowna Tuesday afternoon to speak with members of the Chamber of Commerce, Urban Development Institute and CHBA Central Okanagan.

Despite being an hour late due to flight delays, Wilkinson was in a battling mood with a campaign-style dissertation.

Wilkinson opened up quoting Ronald Reagan from the 1980 U.S. election when he famously asked "are you better off than four years ago?"

After 18 months of NDP rule, Wilkinson asked, "are you feeling more optimistic than 18 months ago?" With 18 new taxes and a government not worried about the rule of law, he suggested no.

Wilkinson said part of the government's job, and what the Liberals will focus on if elected, will be to ensure our kids future will be as good, or better than ours was.

"None of my children expect to have the quality of life that we, as our parents, had," said Wilkinson.

"Did we blow it? Are we making it so it's not possible for the next generation to live as well as we have?"

In order to make life better for all British Columbians, Wilkinson says we need affordable levels of taxation, not punitive taxes such as the Speculation Tax and the new School Tax.

He reiterated a Liberal government would eliminate both of those.

As for the carbon tax, Wilkinson says when the Liberal government introduced the tax, it was revenue neutral, meaning if the tax went up, income taxes went down accordingly.

"The NDP have abandoned that and turned this into a tax grab," he said. And, he added the government is planning to raise it $5 a year for the next four years.

"We are going to have to take a long look at that and make sure it's a fair deal for British Columbia."

Click on the video above to hear Wilkinson's entire speech and the question and answer that followed. 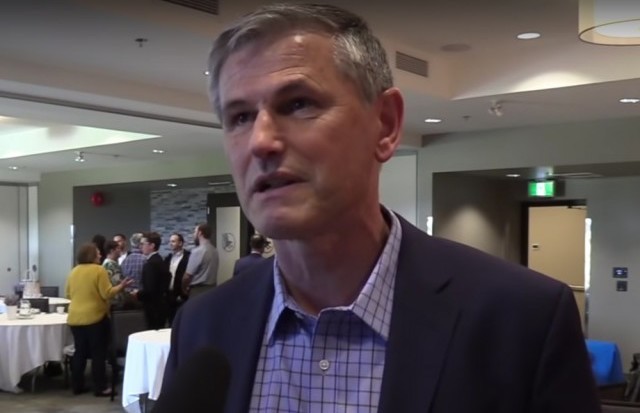