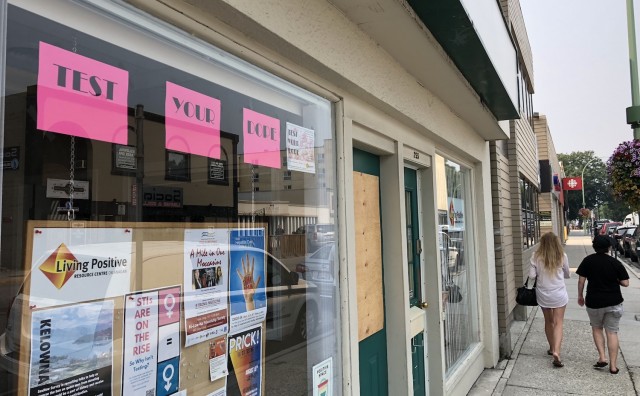 For those looking to see if their illicit drugs contain any deadly surprises, music festivals are no longer the only place where drug testing is offered.

In light of the opioid crisis that has left thousands dead across the province, Interior Health has begun to fund full-time drug testing services in seven communities in the Interior.

Of the 601 overdose deaths in B.C. in the first six months of this year, 81 per cent involved fentanyl. And the deadly opioid isn't just turning up in drugs like heroin. At last year's Shambhala Music Festival, drug testing found fentanyl in 31 samples of stimulants.

Two weeks ago, at the start of Center of Gravity, the Living Positive Resource Centre in downtown Kelowna began offering drug testing, with funding by IH.

While they don't have access to a $42,000 spectrometer, which can shed a more detailed light on what's in a drug sample, they're using fentanyl test strips to test only for the presence of the deadly opioid.

Candice Berry, executive director at the LPRC, said they tested two samples at their office during Center of Gravity, one believed to be ecstasy and one MDMA. Neither turned up positive for fentanyl and they haven't performed any tests since.

A 16-year-old girl died at the festival this year, after reportedly consuming what she believed to be ecstasy.

“We're going to be in conversation (with the festival) in the fall about next year and about how we can maybe be on the grounds or do more support around it,” Berry said.

“The purpose of drug checking is to reduce the risk of overdose and other harmful effects by offering people the option of checking their drugs for the presence of fentanyl and other harmful substances,” said Jessica Bridgeman, IH harm reduction coordinator. “Drug checking can help people make informed decisions about whether to use, how to use and where to use.”

The free drug testing is currently offered in Kelowna Wednesday through Friday from 2 – 4 p.m on a drop-in basis at the LPRC at 255 Lawrence Avenue.

“The police aren't going to be in here, we're not confiscating any of the drugs, we're just providing the education and the knowledge that this could potentially have fentanyl in it,” Berry said.