Two Mastiff-Presa Canario dogs viciously killed a small dog in Mission Creek Greenway Sunday, and the owners have until Wednesday afternoon to claim them.

A family was walking with their small dog, which belonged to a five-year-old autistic boy, about 1:30 p.m. when the attack happened.

The Mastiff-Presa Canarios “were tied up and unattended, and attacked the small dog, severely injuring it,” said Bruce Smith with the Regional District of Central Okanagan.

Smith said the dogs had gotten loose and attacked the small dog, who was on a leash.

According to a witness at the scene, one of the dogs was on a leash and the other was not.

"The guy had one continuous big chain linked around the two of them and it was about 12 feet long and he was holding the chain at the middle," said the grandmother of the boy Lynne Werry.

“The two dogs had no identification and have been impounded, and the owner has 72 hours to claim them,” said Smith. “If unclaimed, the dogs will be humanely euthanized.”

“I was told they were tied up and unattended, which is also not allowed under the bylaw,” said Smith. “The dogs must be attended and have someone looking after them and in their control.”

The dogs were previously believed to be pit bulls by the witnesses and the family.

A five-year-old boy with autism witnessed his support dog get viciously killed by two other dogs on the Mission Creek Greenway, Sunday.

Jayden McCartney and his mother were walking Cazzie, their small Brussels Griffon Shih-Tzu dog, when he got viciously ripped apart by two large dogs.

“He kept yelling get off my dog,” said the mother, Lisa McCartney.

A witness at the scene said she ran over to help after hearing the screams and barking.

“We saw two men on the ground wrestling two dogs off a little dog. The dogs had this little dog each by a side and were tearing him by both sides,” said Taylor Safinuk. “There was blood everywhere.”

She said the two large dogs would go back and forth, locking on the small dog, not giving them a chance to break up the fight.

“I was fighting with everything I had, we all were and it wasn't enough to even faze the dogs,” she said.

The owner of the two large dogs said he was going to get ‘cleaned-up’ and come back for the dogs, but never returned.

Animal control took the animals away. They are currently being held at the animal shelter.

“He just keeps asking where is Cazzie,” said McCartney. “They became so close, to him he was his whole world.”

McCartney added that during the altercation her father's glasses fell off and is asking if anyone happened to find them.

A GoFundMe page has been created to cover the veterinarian bills, which accumulated to over $700.

"It's never what a child should have to witness," said McCartney through tears. 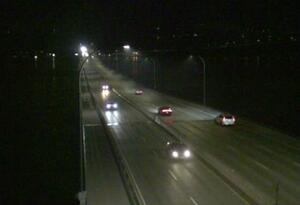