Cleanup crews are working to open up more beaches and parks for the weekend, even though there might not be a lot of space to lay a towel.

"Today we are in City Park taking down the tiger dams that were set up to protect the park during the flooding," said John Davies, regional park staff member. "We'll be here this morning getting rid of the tiger dams. We also have a crew over at Tugboat Beach that's currently working on the tiger dam demobilization over there, and then after that we will be going to our next spot, which has yet to be determined."

Crews still have a lot of work to do and parks will continue to open as the summer proceeds.

Okanagan Wibit, the inflatable play ground that goes up each year on the lake front of City Park, will open July 1, nearly two weeks later than last year.

Owner, Riley Gallagher, doesn't think that this spring's floods will keep the tourists away.

"The beach does look good, the lake is good, it's beautiful weather now," he said. "We just got to draw those tourists in from the coast, in from Calgary. Even the locals out to really see it for themselves."

Water levels are slowly going down but Okanagan lake is still 60 centimetres above full pool, which means a sudden change in weather could quickly shut down down beaches and parks. 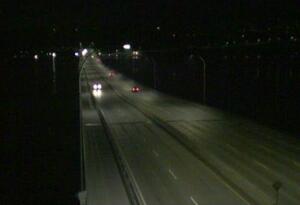