Others remain in place.

Those people on evacuation order should report and register at the Emergency Support Services Reception Centre located in the Salvation Army Church, 1480 Sutherland Avenue (corner of Burtch Road and Sutherland Avenue).

It will close tonight at 10 p.m. and open again tomorrow morning at 11 a.m. to assist residents who have been impacted by flooding.

Due to a shortage of hotel space in the area, evacuees are encouraged to try and find temporary accommodation with family and friends.

The earlier evacuation order for 539 Sutherland Avenue has now been rescinded.

Flooding has forced the closure of several roads in Kelowna, West Kelowna and Lake Country.

Specific locations can be found on the map option on the www.cordemergency.ca/map website.

In the interest of safety, the public is asked to respect emergency road signage and blockades.

Local states of emergency have been declared for the City of Kelowna, the City of West Kelowna and for the Fintry Delta in the Regional District of Central Okanagan to address flooding.

While hundreds of people have been evacuated from their homes near Mill Creek in Kelowna, two residences on Lakeshore Road have had their evacuation orders rescinded, following a small mudslide Friday.

The homes, at 6214 and 6490 Lakeshore Road, were evacuated Friday after a small mudslide crossed the road near them, but the slope has been deemed safe enough for the residents to return home.

A stretch of West Kelowna's Shannon Lake Road, between the turnoff for Treasure View Estates and Bartley Road, is closed indefinitely, after the bridge across McDougall Creek was reportedly washed away.

Both the City of Kelowna and the City of West Kelowna have declared a state of emergency, and several roads have been closed due to flooding.

A map of affected areas can be found here.

More evacuation orders have been issued for apartment buildings and homes in Kelowna, while the City of Kelowna has declared a state of emergency due to the widespread flooding.

Additionally, four single-family homes and one commercial property has been evacuated.

The evacuated properties are now as follows:

Lyle Blakely, president of the strata at 539 Sutherland, spoke to Castanet earlier in the day about the building's residents' efforts to keep out the water. Unfortunately, it appears it wasn't enough.

Several roads have also been closed in Kelowna including:

An evacuation order for Fintry Provincial Park issued Friday remains in effect, as does an evacuation alert for about 90 properties in the Fintry Delta area.

The City of West Kelowna declared a state of emergency earlier in the day.

An evacuation order remains in effect for two properties on Lakeshore Road, due to a landslide Friday.

The Shaughnessy Apartment building, at 534 Sutherland Avenue, has yet to be evacuated, despite earlier reports that an evacuation would be necessary.

Fire crews on scene are waiting for an assessment from FortisBC on the state of the electrical system in the building before ordering an evacuation.

Sutherland Avenue, between Pandosy Street and Richter Street was closed earlier in the afternoon, and resembles a lake more than a road at this point.

Residents of several apartment buildings on the block continue to lay sandbags to try and protect their buildings.

More streets have been closed and another apartment has been evacuated in Kelowna due to continued rising water levels in Mill Creek.

Shaughnessy Apartments, at 534 Sutherland Avenue, is in the middle of being evacuated Saturday afternoon, after water from nearby Mill Creek began filling the lobby.

Emergency crews on scene have noted the water level in the lobby is rising.

Two other apartments in Kelowna were evacuated Friday night.

Marshall Street has been closed since Friday evening.

The City of West Kelowna has officially declared a state of emergency in the wake of massive flooding in the Gellatly Road area and in Shannon Lake.

No new evacuations have been ordered at this time.

Countless homes and businesses along Mill Creek, including Kelowna's beloved Scandia Golf and Games,  have been hit by flooding, from Ellison all the way to Okanagan Lake.

While official evacuation orders have been made for two homes on Lakeshore Road due to a small mudslide and for the Fintry Provincial Park, Jones says emergency crews conducted "tactical evacuations" throughout the night.

Homes on Ethel Street have been significantly impacted, as well as homes on Spencer Road in the Ellison area. Marshall Street, near downtown Kelowna, has been completely closed.

"Emergency crews and municipal staff ... really have to focus on public infrastructure and the safety of the public, and residents are asked to take care of their own properties," said Jones.

She also said they are working to keep sand supplies for sandbags replenished at several locations across the Okanagan, which can be found on their website.

A woman at the Richter Street and Rowcliffe Avenue sand location told Castanet that as of 10 a.m., they had been without sand for 45 minutes.

Flooding mayhem continues this morning around the Central Okanagan.

Residents of the Ellison area report Mill Creek spilled its banks in their neighbourhood as well as in downtown Kelowna.

Spencer Road is flooded between Country View Estates and Country Rhodes, and some residents are said to be evacuating.

Resident Peter Neville says much of the road has been undermined, isolating Country View Estates.

Residents were sandbagging Friday, with the help of the Ellison Fire Department.

Old Vernon Road is also flooded near its intersection with Bullman Road.

"The bridge over Mill Creek at the north end of the Kelowna Airport is also reportedly under threat, although still intact at midnight," said Neville.

Another resident reports at least five houses are flooded in the Country Rhodes neighbourhood. 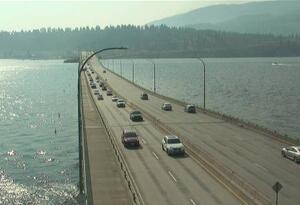