Has ornery owl moved on? 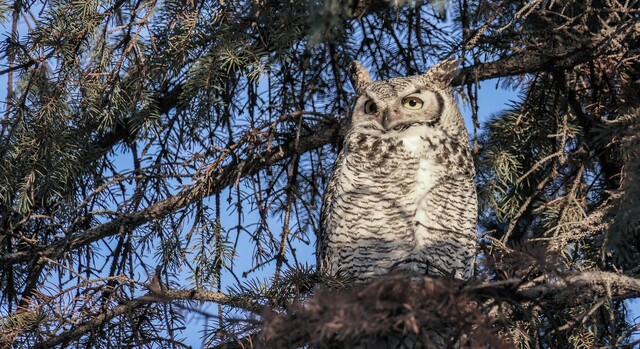 A great horned owl that has reportedly been attacking cross-country skiers at Stake Lake hasn't been seen in nearly a week, but it's not yet known if the bird has moved on from the area.

The Overlander Ski Club is maintaining some nighttime closures due to the aggressive bird.

The first sighting was on Jan. 11, when the owl swooped down on five skiers on the club's trail network between 7 p.m. and 8 p.m.

“The worst injury was someone needed two stitches. Everyone else just had minor scratches. A couple people went and got a tetanus shot to be safe.”

The following evening, on Jan. 12, another skier was attacked and sustained minor injuries.

“There’s nighttime closures in effect in the area where he has been seen,” said Francis.

“We’re strongly suggesting that people ski in groups between the hours of 6 p.m. and 8 a.m., because he’s only been swooping individual people.”

There are currently nighttime closures in effect on the Ponderosa, Hoss, Sitting Bull, and Little Joe trails to avoid another encounter with the nocturnal animal.

“It is early for nesting season. They’re opportunistic nesters, and they take over other animal’s nests,” Francis said.

“The thought is possibly just that it’s hunting in preparation for its nesting season and it's just being territorial.”

The last sighting was on Jan. 15, when one of Overlander’s groomers was swooped by the owl in the early morning.

“We haven’t seen him since Sunday," Francis said.

"So it would be lovely if he had moved on, but we’re not sure yet.”