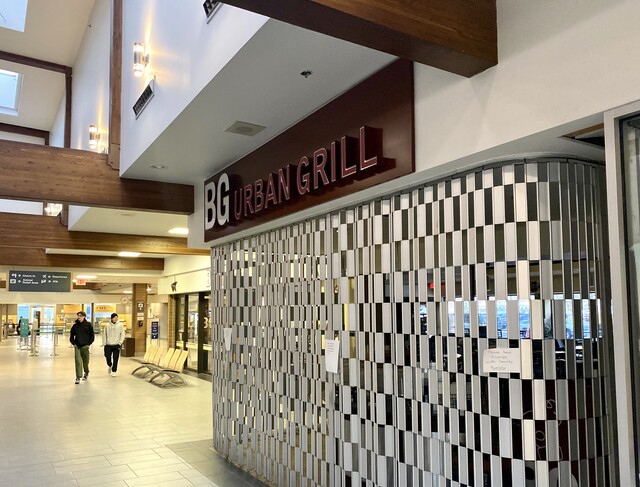 Photo: Castanet Staff
The BG Urban Grill in the terminal at Kamloops Airport has been closed since the onset of the COVID-19 pandemic. The airport is suing the operators of the shuttered restaurant for unpaid rent and repossessing the space.

Kamloops Airport is suing the operator of a shuttered restaurant inside its terminal, seeking more than $165,000 and alleging rent hasn’t been paid in a year.

The airport filed a lawsuit last week in BC Supreme Court against SPBG 812 Bute Cafe Inc., the operator of BG Urban Grill restaurant, which closed early on in the COVID-19 pandemic and never reopened.

The restaurant first opened in 2008 as a Bread Garden franchise. According to the lawsuit, it changed hands in 2015 when Bread Garden assigned its lease to SPBG.

“The defendant has since defaulted on the terms set out in the lease,” alleges the airport’s notice of civil claim.

The airport said in the claim that the lease allows for termination and repossession if rent is not paid.

According to the document, the airport sent SPBG a letter on Dec. 15 saying the lease was being terminated. That was followed up last week with another letter outlining the next steps airport management intends to take.

“On or about Jan. 11, 2023, our office wrote to the defendant advising them that, per the terms of the lease and effective immediately, the plaintiff would be exercising their right to terminate the lease, re-enter and repossess the premises,” the claim reads.

None of the allegations in the claim have been proven in court.

Once it has been served, SPBG will have 21 days to file a response.