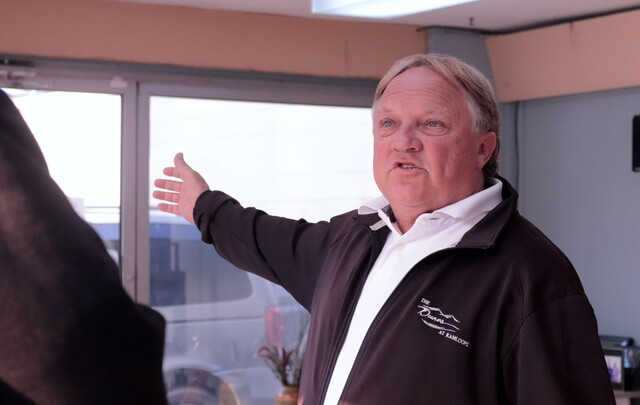 The mayor of Kamloops has been excluded from a second closed council meeting this week, meetings that the city’s CAO says are being held to discuss a possible legal risk — an unknown issue "potentially more than a conflict of interest."

On Thursday, a special open council meeting was held at 3 p.m. during which CAO David Trawin asked council to approve his request to immediately launch into a closed meeting.

According to the agenda, Thursday’s meeting was closed because it relates to “the receipt of advice that is subject to solicitor-client privilege.”

Trawin confirmed Mayor Reid Hamer-Jackson would be excluded from the closed council meeting.

Hamer-Jackson, who chaired the open meeting, asked Trawin who initiated the request for a legal opinion.

"What happened is I received some correspondence from an outside party which potentially put the city, in my opinion, at a potential legal risk. I forwarded that on to our solicitor for comment,” Trawin said.

“Our solicitor got back to me on that, and based upon that opinion, I requested that council authorize a legal meeting.”

Trawin said council approved on Nov. 29 a closed meeting to be held on Dec. 6.

“Under legislation, you can add things up if you’ve already called for a legal meeting under that section of the community charter,” Trawin said.

Hamer-Jackson asked if the purpose of the meeting was so the mayor and council would have a full understanding of conflict of interest issues.

“I’m getting into some things here in a public meeting that I don’t know I can speak in public," Trawin replied.

"I can tell you it was potentially more than a conflict of interest."

Denise McCabe, city solicitor, added that the reason for the special closed meeting and mayor recusal was because the city is receiving “solicitor-client privileged information” that might not line up with Hamer-Jackson's own interests.

“Whatever interest the city has may be adverse to your own personal legal interests,” McCabe said.

Hamer-Jackson asked members of council if they wished to exclude the mayor from the closed council meeting.

After a long silence, Coun. Dale Bass spoke up.

“It’s just logic — when a lawyer tells you to do something, you make sure you do it,” Bass said.

It’s unknown which legal matters will be discussed during the closed meeting.

During the regular council meeting on Tuesday, Hamer-Jackson declared a conflict of interest and left the entire meeting due in part to a staff report on the city’s response to social issues which mentioned ASK Wellness.

The City of Kamloops' CAO will be requesting a special closed council meeting on Thursday afternoon to discuss matters which will be kept confidential due to solicitor-client privilege.

According to the city's website, a special open council meeting has been scheduled for 3 p.m. Thursday, where David Trawin will be requesting that council immediately proceed into a special closed meeting.

The agenda notes the meeting is being requested under Section 90 of the Community Charter, which states a council meeting can be closed to the public if the subject matter relates to one or more specific topics.

According to the agenda, Thursday’s meeting will be closed as it relates to “the receipt of advice that is subject to solicitor-client privilege, including communications necessary for that purpose.”

While there is no confirmation about the topic of Thursday’s closed meeting, it comes on the heels of an earlier closed council meeting held Tuesday morning which did not include Mayor Reid Hamer-Jackson.

Hamer-Jackson told Castanet Kamloops he sat for two hours in his office because “they were having closed council meetings about me.”

While Hamer-Jackson wasn’t able to say exactly what the closed meeting was about, he said he knew the city’s lawyer was involved.

Later on Tuesday, Hamer-Jackson declared a conflict of interest at the onset of the regular council meeting, due in part to a report on the city’s response to social issues which mentioned ASK Wellness. Hamer-Jackson then left city hall for the remainder of the meeting.

When reached on Thursday morning, Hamer-Jackson said he plans to conduct Thursday afternoon’s special council meeting in which Trawin will ask for a closed meeting and council will vote on the matter, opening it up for discussion.

"I would think I would, especially if it's anything to do about myself," he said.

"I think you'd want the person that is apparently in conflict to know about the conflict."