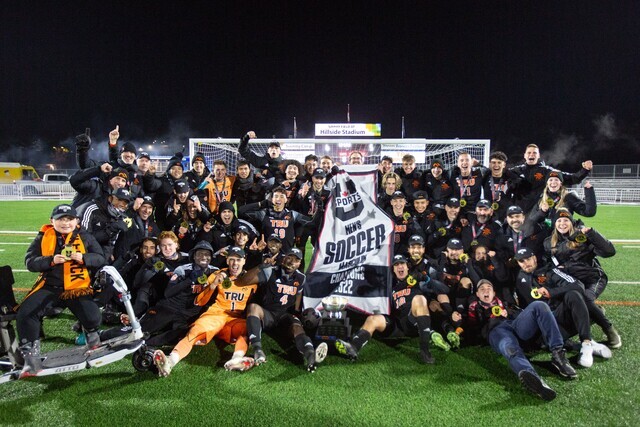 Kamloops city council will be inviting the Thompson Rivers University men’s soccer team to a future meeting, congratulating the team for winning the school’s first U Sports national title.

On Sunday, Nov. 13, the WolfPack beat the UBC Thunderbirds in a penalty kick shootout to win the national championship — the first U Sports title ever won by a TRU team.

The team was cheered on to victory at Hillside Stadium by what many said was the biggest crowd they had ever seen at the field for a TRU sporting event.

In a council meeting on Tuesday, Nov. 15, Coun. Kelly Hall congratulated the team, as well as head coach John Antulov and Curtis Atkinson, TRU’s director of athletics, on the championship victory.

Hall also thanked the community and corporate partners “for making this national event what it was.”

“If you've been listening to the media over the last five or six days, the City of Kamloops and our workers and the crew did a fantastic job in prepping the field for the event,” Hall said.

“For me, it just talks about the facilities that we have here in Kamloops to be able to host national events and the need for more facilities.”

In response to Hall’s comments, Coun. Nancy Bepple proposed sending a letter of congratulations to the team, and Coun. Bill Sarai suggested including an invitation to appear in council chambers for a formal acknowledgement.

Coun. Margot Middleton asked staff if they could have an award or memento of congratulations made up for council to present to the team.

“We'll come up with something, we’ll work with the mayor's office to get approval on that,” Trawin said.

The motion was put to a vote, and mayor and council unanimously approved the recommendation to invite the soccer team to a future council meeting.