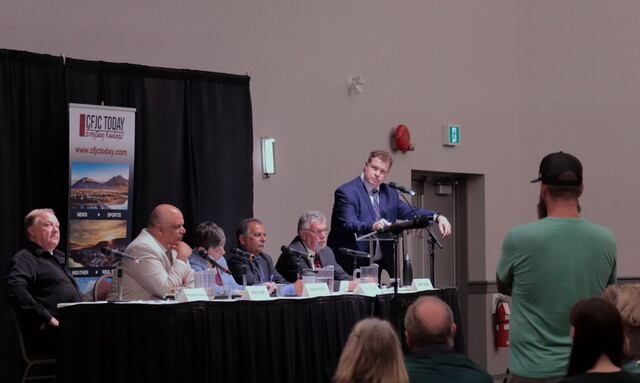 Photo: Kristen Holliday
All five Kamloops mayoral candidates took questions from the audience in a moderated debate co-hosted by CJFC and the Kamloops Chamber of Commerce on Tuesday night.

Kamloops mayoral candidates sparred over questions related to tackling crime, substance use and restoring a sense of community safety in a debate Tuesday night at Thompson Rivers University’s Grand Hall.

The moderated debate was co-hosted by CFJC and the Kamloops and District Chamber of Commerce. It was attended by all five mayoral candidates and about 150 members of the public.

Moderator James Peters, assistant news director at CFJC, asked mayoral candidates a number of prepared questions submitted by the chamber and other groups before opening up the mic to audience questions.

One attendee asked candidates what they will do to make community members feel safe.

Sadie Hunter said feelings of fear and frustration are valid, but a community conversation around solutions needs to start from a place of compassion.

Hunter noted the complexity of solving an issue rooted in untreated mental health conditions, substance use and a lack of housing, and said the city needs to continue to be loud to lobby for healthcare-based solutions.

“The answer to how to solve it is not straightforward. And if someone does give you a platitude and say that they have a straightforward answer with a stroke of a pen — build a facility, move people out to whatever — they’re lying to you. Because that’s not feasible or logical,” Hunter said.

“I never knew that it was illegal to try to get off drugs and into recovery through recovery centres,” Hamer-Jackson said.

Ray Dhaliwal brought up a recent conversation he had talking with students who said they feel unsafe at the North Shore bus loop, noting the youth came up with great ideas.

He said there needs to be more patrols — “foot patrols, bike patrols, horseback even if we can.”

“The first step is to get more boots on the ground, have a CSO [community service officer], a bylaw officer, at the bus loop 24 hours, as long as the buses are running to make sure that the people that are using those loops are safe and not harassed all the time,” Dhaliwal said.

Hunter responded to both Dhaliwal and Hamer-Jackson’s responses. Hunter said she has lost friends to substance use, and added treatment for substance use is valuable, but people can’t be forced into treatment.

“It sounds great — we’ll build a facility. But where's the money coming from? We just had a conversation about tax rates. You can't pay for that without raising taxes or forgoing other services,” Hunter said.

Hamer-Jackson replied, saying he thought a specific source of grant funding from the province could help support such a facility.

Dhaliwal responded by saying bylaw officers left when the city transitioned to the community services model, and noted that decision is currently going through arbitration.

“We would have those people in place if the bylaws were still in place,” Dhaliwal said.

Another attendee asked candidates for their “best outside-the-box idea” to help with homelessness, theft, vandalism and substance use.

Dieter Dudy said the city needs a complex care facility and a way to handle prolific offenders, noting in the early 1980s, the provincial government closed down facilities and released people into communities without giving them the necessary support services.

“If you look at the whole homelessness situation, there's only about 10 to 15 per cent of them that are creating the issues that we have today," he said.

"They're responsible for 90 per cent of the crime. We need to find a way to house them and give them the care that they desperately need."

Arjun Singh said he is advocating for funding more outreach workers as part of his platform.

A woman who identified herself as a registered psychiatric nurse spoke up, saying she is trained to educate and work with communities on issues of homelessness and stigma around addictions.

She decried “disinformation” coming from some who are running for council and for mayor, saying that organizations who are there to help have been denied funding from “particular council members who now say that they want more of these people out there.”

“You're saying that you want to talk to professionals, but the information that you're giving is not valid. Please tell me, when are you going to work with us? Because we want desperately to work with you,” she said, backed by applause from the audience.

“As your mayor, I will reach out to you,” Dhaliwal said, noting his mother has been in the medical field for years.

Singh said it’s best practice to talk to the experts.

“We have to work together and we have to stay in relationships — very, very key thing. So I am committed to that,” Singh said.

Hamer-Jackson said he had already reached out to professionals and recovery societies, and Hunter said she wants to hold a forum so community members can hear from subject matter experts on issues related to mental health and addictions.

Dudy thanked the woman for her “thoughtful and impassioned plea” and noted that council has been trying to find answers but has hit roadblocks.

“It's unfortunate when you sit there and speak to a minister and that person just goes in circles," he said.

Another all-candidates forum, this one featuring mayoral candidates and council hopefuls, will run Wednesday night at TRU's Grand Hall, starting at 7 p.m. The event, which is free to attend, is being put on by Kamloops This Week, Radio NL and CBC Kamloops. 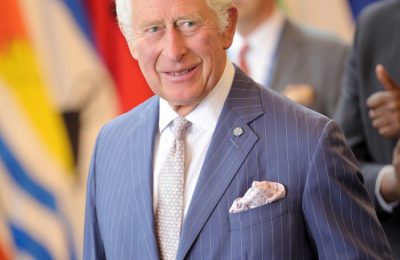