Mounties searching for two suspects after robbery at Brocklehurst store 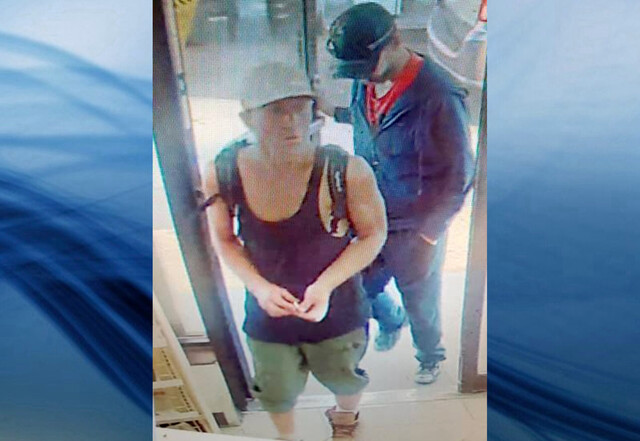 Photo: RCMP
Police are trying to track down these two men following a robbery Wednesday at a Brocklehurst convenience store.

Kamloops Mounties are hoping tips from the public will help them track down the suspects in a Wednesday night robbery at a store in Brocklehurst.

Police said they were called to a convenience store in the 1700-block of Tranquille Road at about 6:30 p.m. on Wednesday for a report of a hold-up involving a knife.

“The two men captured in this image allegedly entered the store, picked up some items, then left without paying,” RCMP Cpl. Crystal Evelyn said in a news release.

“When the employee confronted them just outside of the store, one of the suspects produced a knife and pointed it at them, then left in the direction of Nicolani Drive.”

Evelyn said patrols of the area did not turn up the suspects, so police are asking the public for tips.

The first suspect is described as a white man with a muscular build wearing a black tank top, knee-length khaki shorts, beige work boots, a beige ball cap and a black backpack.

The second suspect is described as a man, possibly white, with a short beard. He was wearing a black ball cap with sunglasses on the brim, a blue zip-up hoodie, a red T-shirt, blue jeans and running shoes.