Win dinner, tickets to a comedy show and hotel accommodation

Win a fun night of laughs 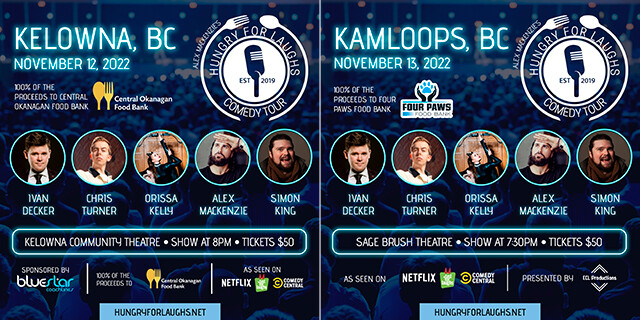 Castanet readers are being given the chance to win a night out in Kamloops or Kelowna.

Alex MacKenzie’s Hungry for Laughs Comedy Tour will be in Kelowna on Nov. 12 and Kamloops on Nov. 13. The show features three world-class comedians, a freestyle rapper and one of the world’s only foot archers.

The acts have been featured on Netflix, Just for Laughs, MTV and HBO, among others.

Two winners will be drawn on Oct. 22, with prize packs including two tickets to the show, a $100 gift card for Match Eatery and Public House and a one-night accommodation in a hotel, good for Kamloops or Kelowna.