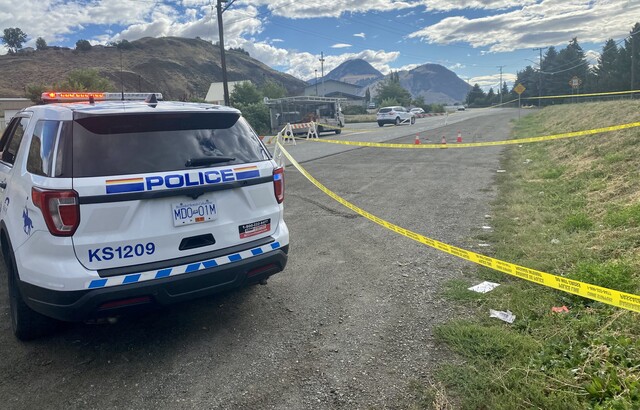 Photo: Tim Petruk
Police have part of Ord Road taped off on Saturday morning near the City of Kamloops BMX track.

The Kamloops RCMP Serious Crime Unit said that a drive-by shooting that left one man dead and another injured on Friday night is believed to be a targeted incident and is considered a homicide.

Police responded around 10:45 p.m. at Ord Road near Singh Street for a 911 call involving two men who had been shot while inside a red Toyota Matrix.

RCMP said that the driver of the vehicle was pronounced dead shortly after, while the second victim was taken to the hospital in stable condition.

Several hours later, around 2 a.m., police were called to a vehicle fire on Frontage Road in Rayleigh. Police are looking into whether the incidents are related, which is part of the ongoing investigation.

“Although the investigation is in its very early stages, the homicide victim was well-known to police and the shooting is believed to be targeted,” said Kamloops RCMP Inspector Jeff Pelley in a press release.

“It is very important that anyone with information come forward as soon as possible to help officers determine what transpired and who is responsible.”

Police are seeking anyone who witnessed or may have information related to this incident, including security footage, cell phone or dash cam video, that may have captured anything suspicious to contact the Kamloops RCMP. A

A stretch of the 1500-block of Ord Road is behind police tape on Saturday with a Mountie standing guard.

Police have so far not provided any information about what happened, but numerous residents of the nearby Foothills Estates trailer park reported hearing gunshots at about 11 p.m. on Friday.

“I heard about four shots,” said a man, who asked that his name not be published.

“I thought it was fireworks at first, and then I heard the cop cars come by.”

The neighbour said he saw two vehicles stopped along Ord Road just before the apparent shooting.

Police have a portion of Ord Road taped off Saturday morning, but Mounties are tight-lipped about what happened.

The apparent crime scene is in the 1500-block of Ord Road, directly across the street from the City of Kamloops BMX track.

At about 9:30 a.m., one police officer was at the scene. He said he couldn’t comment on what happened.

Inside the police tape, broken glass and discarded rubber gloves can be seen on the ground.

Castanet Kamloops has reached out to police for information about what happened.

Single-lane alternating traffic is getting through.