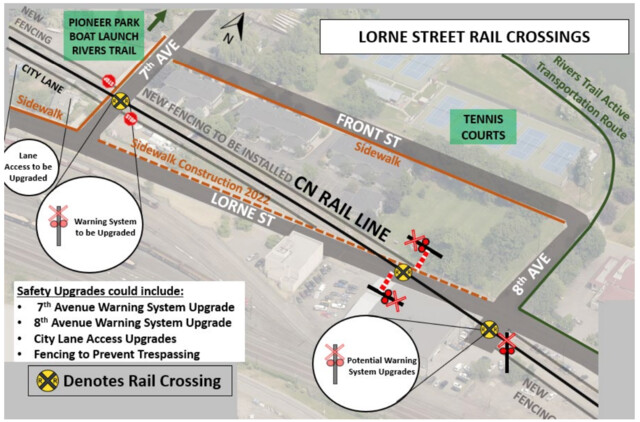 Photo: City of Kamloops
The City of Kamloops is applying for a grant that would help pay for safety improvements at three rail crossings along Lorne Street. Staff say this work could result in whistle cessation along the corridor, something that has become a nuisance to nearby residents.

The City of Kamloops is applying for a grant to fund improvements at three railway crossings on Lorne Street, which staff say could launch a process to hush frequent train whistles that are a nuisance to nearby residents.

During Tuesday’s council meeting, Purvez Irani, the city’s transportation manager, said staff have looked for funding options since Lorne Street residents asked the city to make room in its supplemental budget for a whistle cessation project.

The $1.2 million supplemental budget item was denied this spring, but staff were told to watch for grants that might help kickstart a process to alleviate the whistling.

“Council did direct us to seek any grant opportunities available to improve safety and to seek whistle cessation so we've kept our eyes on it, and basically we are requesting your permission to proceed,” Irani said.

In a report prepared for council, staff said rail traffic along the Lorne Street corridor has significantly increased since CN received a contract to transport coal from the Interior to coastal ports last spring.

The frequent rail traffic has resulted in additional noise, whistles and vibrations as trains pass through three at-grade rail crossings, which has become disruptive to neighbours.

“Train whistling in the area has negatively impacted the lives of residents and users of amenities in the Lorne Street area. Installing additional safety measures along the rail line near Lorne Street could prevent future rail accidents and improve the well-being of residents,” the report said.

Irani said the city is looking at installing upgrades like flashing lights, bells and some fencing at three crossings along the corridor, including one at Seventh Avenue, another at Eighth Avenue and a crossing at the intersection of Eighth and Lorne Street.

“This would potentially improve the rail safety across three crossings on the Lorne Street corridor, and also it would put us in a position where we could seek whistle cessation,” Irani said.

According to the city report, it’s estimated to cost $2.3 million to undergo all steps necessary to stop the train whistling, not including the cost of acquiring land needed to implement some upgrades.

This estimate is up from the $1.2 million budget put forward earlier this year. Irani said this is due to inflation and rising equipment costs.

If the city’s grant application is successful, Transport Canada’s Rail Safety Improvement Program will fund 80 per cent of eligible project costs, with the city pitching in $462,200 from its gaming funds.

Irani said if the grant application is unsuccessful, the project won’t move ahead, but the city can apply for funding again in 2023 after doing additional design work.

According to the city, whistle cessation would be a multi-year project. If the grant is successful, rail crossing improvement work will start in fall 2023 and end in spring 2025.

The staff report noted the success of whistle cessation is not guaranteed.

Irani said the process involves an eventual meeting with CN, going over all rail crossing improvements and then discussing the possibility of whistle cessation.

“Both parties have to agree that yes, we can in fact take the whistling out as one of these safety measures,” Irani said.

Coun. Sadie Hunter asked Irani if the disruption to nearby residents would continue if train whistles are exchanged for the sound of bells at the crossings.

“If we’re installing bell units instead, is that kind of changing one problem for the other, or is it anticipated that overall that the noise will be reduced?” Hunter asked.

Irani said the train whistling is recorded at about 143 decibels, while bell sounds are much lower, at 84 decibels.

Coun. Dale Bass pointed out that the train bells ring for longer than a train whistle might sound.

“Don't the bells ring from before the train arrives at the crossing, until the two-mile long train gets through the crossing? So while the decibel level might be lower, the noise is longer,” Bass said.

Irani said the bells would ring in advance, but the level of noise “would be far less.”