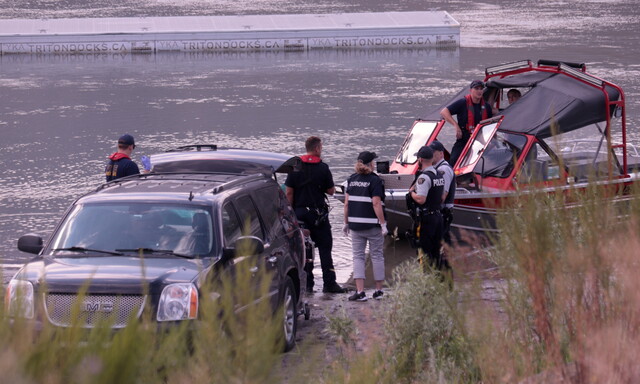 Photo: Kristen Holliday
The coroner, Kamloops Fire Rescue and police were near the float plane docks by the Kamloops Airport after a body was found in the Thompson River on Thursday, Aug. 11.

A body pulled from the Thompson River on Thursday has been identified as Michael Mthandazo, a Vernon doctor who was presumed drowned after being swept away by currents near McArthur Island last month.

In a news release on Thursday afternoon, Kamloops RCMP Cpl. Crystal Evelyn confirmed the man, who had been missing since July 30, had been found dead.

Evelyn said police and a Kamloops Fire Rescue crew were called to Aviation Way on Thursday at about 8:35 a.m. after receiving a report of a body caught in logs near the float plane docks.

Officers then contacted the BC Coroners Service.

“Since then, the man’s identity has been verified and his family notified of his death,” Evelyn said, adding the death is not considered to be criminal in nature.

Mthandazo was reported missing at about 5:30 p.m. on Saturday, July 30. Police said he entered the Thompson River near McArthur Island to help a child in distress, after which he was swept away by the current.

RCMP and search and rescue teams underwent several searches for the man in the days following the incident.

According to a GoFundMe page set up to support Mthandazo’s family, he had travelled to Kamloops’ McArthur Island Park to play in a recreational soccer tournament.

A statement on the GoFundMe page said Mthandazo went for a swim with his son, but the pair encountered a strong current.

“Although he was able to help his son out of the water, he wasn’t able to get out himself,” the statement said.

The GoFundMe shows over $32,000 has been raised to support Mthandazo’s wife and two sons in the wake of the tragedy.

Kamloops RCMP have confirmed police and coroners responded to a report of a body found in the Thompson River on Thursday morning.

RCMP Cpl. Crystal Evelyn said the body had been found near the airport float plane dock and boat launch.

A man who had been cycling along a nearby trail told Castanet Kamloops he saw the body near a log boom sometime after 8:30 a.m. and called 911.

“I ride here every day. … I just saw this out there and it didn’t look right,” he said.

According to Evelyn, police are working on confirming the identity of the body and notifying next of kin.

A body was found Thursday in the Thompson River near Kamloops Airport.

A Castanet Kamloops reporter at the scene just after 9 a.m. said crews were working to remove the body from the water.

The body was called in after it was spotted by a passerby at about 8:30 a.m.