Fled on foot after rollover 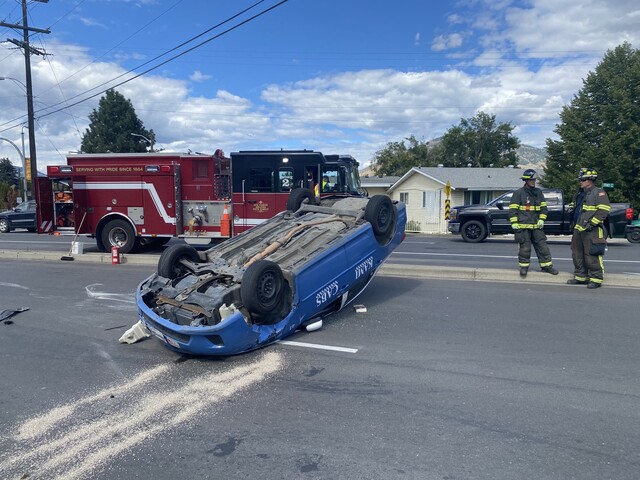 Photo: Tim Petruk
A blue Kami Cabs sedan pictured on its roof after a collision that happened along Fortune Drive on Friday afternoon.

A hectic police chase was the cause of a rollover crash blocking southbound traffic along Fortune Drive on Friday afternoon.

According to the Kamloops RCMP, the police received the report of a robbery with a weapon from a cab driver at 2:47 p.m.

Police immediately responded and located the sole suspect in the cab in the area.

While front-line officers made attempts to stop the vehicle, it fled from them at a high rate of speed.

RCMP said the stolen taxi was then involved in collisions with two other vehicles and the suspect fled the area on foot.

Officers would utilize a coordinated response with the police dog service team to quickly locate and arrest the suspect without further incident.

The suspect is being held in custody for a bail hearing, with police recommending charges of robbery, flight from police, dangerous driving and failing to remain at the scene of a collision, according to police.

“This was a very brazen and dangerous situation in a highly populated area of the city putting the public at extreme risk. Through the immediate and strategic response of our front line members and Police Dog Services, this offender was successfully arrested and there were no injuries to the public," Officer in Charge of Operations, Insp. Jeff Pelley said in a release.

RCMP are working to gather all of the facts in the case to ensure the person responsible is held to account.

Police are asking anyone with information or video of this incident to contact police at (250) 828-3000.

Emergency crews were called to Fortune Drive just south of Sydney Avenue just before 3 p.m. for a report of the collision.

Two vehicles appeared to be involved in the crash, including a blue Kami Cabs sedan.

There is no official word yet on any injuries.

As of 3:15 p.m., Fortune Drive’s southbound lanes were blocked at Sydney Avenue, but northbound traffic was moving.