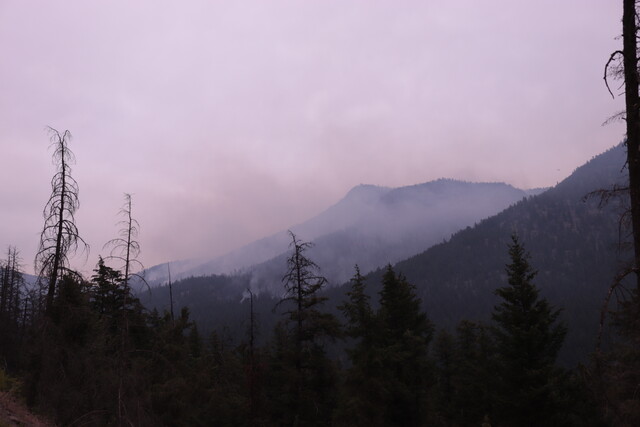 Heavy rain falling in the area of the Watching Creek wildfire on Thursday helped to reduce fire behaviour, according to the BC Wildfire Service.

BCWS said the wildfire, burning northwest of Kamloops, received about 10 millimetres of rain.

“The cool and wet weather yesterday reduced fire behaviour to rank one,” BCWS said in a Friday morning update.

BCWS uses a ranking scale from one to six to classify wildfire behaviour, with rank one describing a smouldering ground fire, with no open flame and a slow rate of fire spread.

The agency said the weather is expected to warm on Friday, but crews expect fire behaviour to remain low.

“Smoke will likely remain visible from Kamloops and nearby communities for the coming days, however fire activity is expected to remain reduced for the time being,” BCWS said.

The Watching Creek wildfire was believed to have been sparked by lighting on Friday, July 29. Mapping from BCWS estimates the fire is 270 hectares in size.

This is up from the previous estimate of 195 hectares, although BCWS said the increase is due to more accurate mapping, as the fire has not significantly grown since Tuesday.

On Friday, BCWS said crews will continue to work on water delivery and mop up in the northeast section of the fire, where heavy equipment completed a guard on Thursday.

“Access has now been established in the steep terrain to allow crews to work directly on the western flank.”

Structure protection had been set up on a property near Pass Lake as a proactive measure, and BCWS said this will be demobilized on Friday.

“Structures in the McQueen Lake area have been assessed and triaged for structure protection if necessary, but there is no current threat to structures,” BCWS said.

As of Friday, there are 77 firefighters working to battle the Watching Creek wildfire, along with eight pieces of heavy equipment.

Ground crews are supported by six helicopters. BCWS said helicopters have been bucketing water to cool the fire and will continue as necessary.

BCWS said skimmers and air tankers were used to deploy water and retardant earlier in the week, and while aviation resources are available to assist, they aren’t expected to be needed at this time.

“With reduced fire behaviour and crews direct attacking the fire, these resources [are] not expected to be necessary,” BCWS said.