Number of firefighters at Watching Creek more than doubles, with more en route

The number of firefighters on the ground battling a blaze burning northwest of Kamloops more than doubled on Wednesday — and more are on the way.

According to an update Wednesday afternoon from the BC Wildfire Service, 46 firefighters are fighting the Watching Creek fire, which is still estimated at 195 hectares in size.

“There are now two unit crews working on this fire,” the update read.

“Crews are working to establish a water delivery system in the northeast corner of the fire. Additional crews are en route.”

Terrain is presenting challenges to crews fighting the blaze.

“Ground crews are working on establishing control lines in operable ground that will provide a safe, defendable space to carry out suppression activities.”

Heavy equipment is being used to build guards on the north side of the fire “where terrain allows.”

The latest B.C. Wildfire Service mapping, which was completed on Tuesday, places the fire’s perimeter about nine kilometres north of Kamloops city limits at Tranquille. The fire’s easternmost flank is about 13 kilometres west of Westsyde Road.

Reduced fire activity is expected Wednesday on the Watching Creek blaze burning northwest of Kamloops due to a change in weather.

The wildfire, burning about nine kilometres north of Tranquille in the Lac du Bois area, is believed to have been sparked on Friday by lightning. It saw significant growth during the heat of Monday afternoon and is now estimated at 195 hectares.

“Cooler weather, higher relative humidity and cloud is expected today and will help to reduce fire behaviour,” the BC Wildfire Service said in an update posted online on Wednesday morning.

“Smoke will likely remain visible from Kamloops and nearby communities for the coming days.”

Twenty firefighters are on the ground battling the blaze, the agency said, with six helicopters and 10 pieces of heavy equipment providing support. Skimmers and air tankers hit the fire from the air on Tuesday, and the plan calls for more of the same on Wednesday.

This story will be updated throughout the day as more information becomes known. 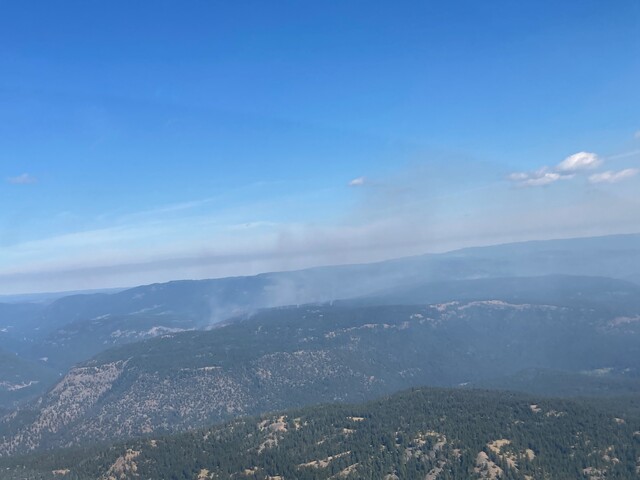 The Watching Creek wildfire is burning about 18 kilometres away from the east perimeter of last year’s Sparks Lake wildfire, according to BC Wildfire Service.

The Watching Creek fire — estimated to be about 195 hectares in size — is burning about nine kilometres northwest of Kamloops city limits at Tranquille, sparked by lightning late last week.

When asked if the wildfire’s proximity to a previously burned area could be used as a containment strategy, Aydan Coray, fire information officer for BCWS, said it was possible — but the fire would have to experience a lot of westward growth to get that far.

“They have done it in the past. It also depends if the area that burned last year, how severely it burned last year. Because some areas burned really severe — down to mineral soil — and there's no fuel left to burn, which is kind of like a fuel guard,” Coray said.

“Some areas would have burned less severely and likely had quite a good recovery in vegetation this spring, with all the moisture. So completely depends on the area and what fire activity they're seeing.”

Coray said if a wildfire is sparked in a similar area to a previous blaze, there are also sometimes old guards in the area that can be reused to control the spread of the new fire.

On Tuesday, BCWS crews returned to fight the wildfire after they were evacuated from the area by helicopter on Monday due to fire behaviour increasing in intensity.

“Helicopters and skimmer air tankers have been actively working on the wildfire throughout the day,” BCWS said in a Tuesday evening update.

Coray said an Incident Management Team was assigned to take control of the wildfire, and will start work on Wednesday.

According to BCWS, an IMT takes on elements of response like finance, logistics, planning and operations, freeing up the local fire centre to focus its resources on responding to new fire starts.

The Thompson-Nicola Regional District has issued an evacuation alert for some properties in the Lac Du Bois Grasslands Protected Area and Pass Lake, McQueen Lake and Isobel Lake.

The City of Kamloops activated its Emergency Operations Centre on Tuesday, saying it was keeping an eye on nearby wildfire behaviour but there was no imminent threat to the community.

This story will be updated throughout the day as more information becomes known.