TteS Kukpi7 on of 14 appointed to Order of British Columbia

Order of B.C. for Casimir 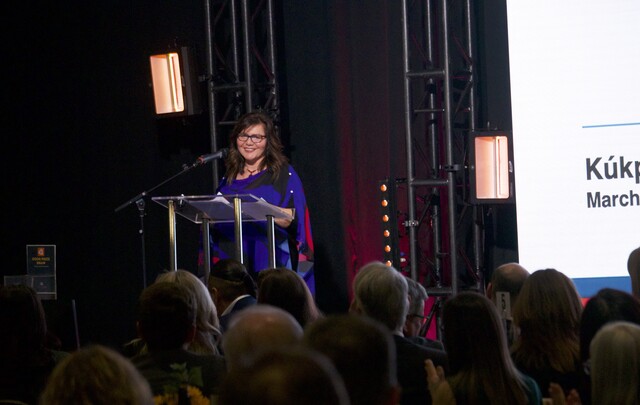 Tk’emlups te Secwepemc Kukpi7 Rosanne Casimir will be appointed to the Order of British Columbia — the highest honour the province can award.

Casimir is one of 14 British Columbians selected by an independent advisory council to be appointed to the Order of B.C. in 2022. There were a total of 194 nominees this year.

According to the province, Casimir has been a strong advocate for justice, reconciliation and healing for First Nations, becoming the face of Le Estcwicwey (the missing).

“Kukpi7 Casimir brought the horrifying story of Le Estcwicwey to the world. She was able to use the local, national and international media attention it received to help educate the public about the real history of the colonial impacts of the residential school system,” the province said.

“This story brought a collective, nationwide grieving to Canada, as people who previously knew little about residential schools now stood side by side with TteS in shock and horror.”

The province said this was the start of a renewed commitment to learn about the impacts of residential schools, and noted that Casimir recently represented B.C. as a delegate to the Vatican, meeting the Pope directly to share the experiences of survivors.

In a social media post, the City of Kamloops congratulated Casimir on her appointment.

“Kukpi7, we are honoured to work alongside you and your community towards a better future,” the city said.

Janet Austin, the province’s lieutenant governor and chancellor of the Order of B.C. congratulated all new new members in a statement.

“It is my great honour to welcome 14 new members to the order,” Austin said.

“I share these congratulations with gratitude to these incredible individuals who have done so much to enrich their communities. Their leadership and generous service has enhanced the lives of so many British Columbians and has contributed to shaping a better future for all residents of our province.”

The Order of B.C. investiture ceremony for recipients and guests will be held at Government House in Victoria in late fall.

Our sincerest congratulations to Kúkpi7 Rosanne Casimir on being appointed to the Order of British Columbia. Kúkpi7, we are honoured to work alongside you and your community towards a better future. #community #workingtogether #tkemlúps #kamloops https://t.co/aRUUu4SAG2 pic.twitter.com/K4OOsVCHJ0