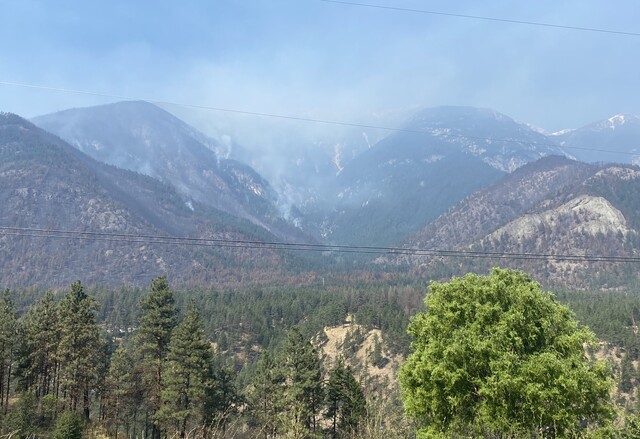 The Nohomin Creek wildfire near Lytton continues to see minimal growth in high elevation areas, north of the Stein River.

In a Monday morning update, the BC Wildfire Service says conditions remained hot and dry on Sunday, but fire activity did not increase in the afternoon as much as on previous days.

"Helicopters were bucketing steadily through the day and were effective in reducing fire behaviour," the wildfire service says.

Today, temperatures and low humidity are predicted to cause increased fire behaviour upslope of the Stein River.

As a result, smoke will continue to be visible from Lytton and surrounding areas.

The fire is estimated to have burned 2,910.3 hectares.

There is little to no fire activity on the east flank, where crews continue to locate and extinguish hotspots.

On the north flank, unit crews continue to establish fuel-free lines and are installing a sprinkler system for reinforcement, north of Seven Mile Creek.

To the east, additional crews are patrolling and mopping up areas within the fire’s perimeter. Helicopters are continuing to bucket areas of increased activity.

On the south, crews are patrolling and mopping up along the fire’s perimeter between Stryen Creek and Nohomin Creek, where they continue to establish containment lines.

The BC Wildfire Service says the Nohomin Creek wildfire near Lytton may not see substantial growth in the coming days if the weather continues to cool down as forecast.

Karley Desrosiers, fire information officer, said while wildfire activity increased during the hottest part of the day on Saturday, the fire was less active and relatively stable on Sunday.

“In terms of the heat and the temperature, it certainly could have been a lot more intense. We did see an increase yesterday [Saturday] and the day before, but it was expected and predicted based on the conditions,” Desrosiers said.

Desrosiers said crews are still seeing the majority of the active fire in the northwest edge, in fairly rocky terrain.

According to BCWS, rocky slopes and sparse fuels have slowed fire growth in some areas.

BCWS said crews are mopping up along the south flank of the fire between Stryen Creek and Nohomin Creek, and continue to establish containment lines.

To the north, crews are establishing fuel-free lines and continue to install a sprinkler system north of Seven Mile Creek, and helicopters are bucketing areas with increased fire activity.

Desrosiers said there is little to no fire activity on the east flank, where crews have worked to extinguish hotspots.

"Crews were out patrolling and mopping up some hotspots that were detected by an aerial scan two nights ago,” Desrosiers said.

“Other than that, with the downturn in weather, [we’re] likely not to see any substantial growth in the coming days, but of course, things can change quite rapidly.”

Desrosiers said crews will work to update the fire perimeter in the coming days.

As of Sunday, there were 89 personnel assigned to battle the wildfire, including 18 Lytton First Nation firefighters. Ground crews were supported by 11 helicopters and three pieces of heavy equipment.