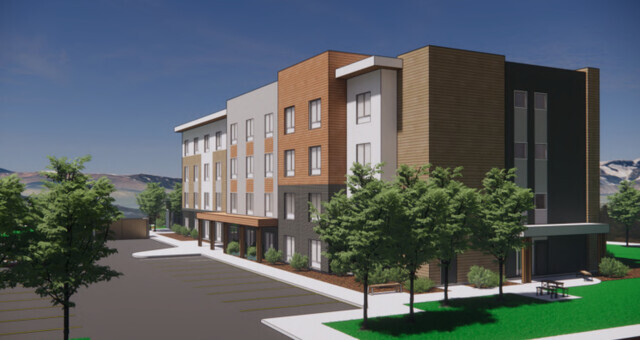 Photo: City of Kamloops
A rendering of a new four-storey dormitory proposed by Thompson Rivers University.

A proposed four-storey student housing development near Thompson Rivers University has been given the nod of approval from Kamloops council.

At a meeting on Tuesday, city council voted to authorize the first three readings of a housing agreement bylaw, and approved issuance of a development permit for the new dormitory, pending bylaw adoption.

Marvin Kwiatkowski, the city’s development, engineering and sustainability director, said the proposed development — which will be built within TRU’s College Heights — will have 80 units and 148 total beds, 40 enclosed bike parking spaces and 38 vehicle parking spaces.

According to the city, fewer parking spaces are acceptable as the housing development will be for students only, who are less likely to own a car and have their school and other amenities a short walking distance away.

“A housing agreement would be part of the requirement to ensure only TRU students are permitted to reside within the building in order to meet that dormitory parking requirement,” Kwiatkowski said.

The proposed dormitory will be constructed in the northwestern portion of the College Heights area, and is possibly the first of two more student housing buildings.

Each unit would have a kitchenette, with the development including plans for outdoor landscaping and common areas inside the building.

“Outdoor amenity areas include picnic tables and benches along with large grassed areas in lieu of providing amenity space in the form of patios and balconies, but there are other amenities within the building, such as a games room, a movie room, as well as a study room,” Kwiatkowski said.

As part of the development, TRU will construct a multi-use pathway connecting Summit Drive with Dalgleish Drive, and a signed statutory right-of-way will ensure members of the public can access the path.

Mayor Ken Christian asked if this development is meant to replace the temporary portables set up in late 2021 for use as student housing.

Christian said he wondered if the university will be motivated to remove the temporary housing as housing affordability continues to pose an issue.

Kwiatkowski said the intent is to have the new development replace the portables.

“There's a bit of a rush to get this moved through as quick as we can. Whether all the student housing will disappear right after this phase, I'm not 100 per cent sure on that one. But yes, the intent is this gets developed, and then that temporary housing will disappear hopefully in the next year or so,” he said.

Staff’s recommendation to pass the housing agreement bylaw through the first three readings was approved by council.

Coun. Arjun Singh and Coun. Kathy Sinclair declared conflicts of interest and were not present for the discussion or the vote.