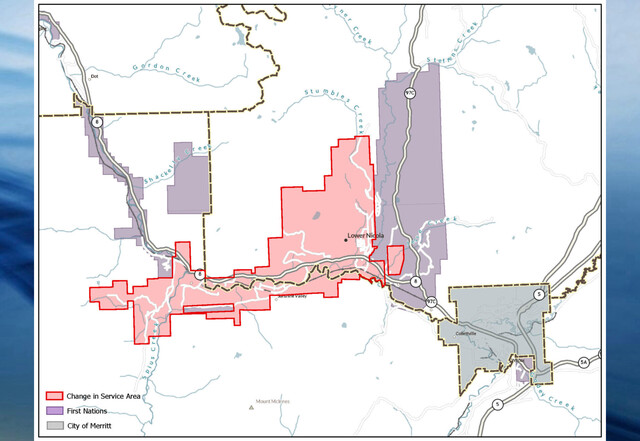 Photo: TNRD
The area shown in red on this map will no longer have fire protection coverage, the Thompson-Nicola Regional District said Thursday.

A fire department run by a First Nation near Merritt no longer has the manpower to respond to calls in neighbouring communities.

The Thompson-Nicola Regional District said Thursday it is suspending fire protection services in the Lower Nicola area northwest of Merritt.

The Lower Nicola Indian Band Fire Department had been contracted by the TNRD to provide fire protection coverage to properties on TNRD land in the area.

“Operationally, right now, they don’t have the capacity to respond to calls outside of their own community,” Jamie Vieira, deputy general manager of operations with the TNRD, told Castanet.

“That’s why we had to suspend the service. They don’t have enough firefighters at this time to respond to those calls.”

Vieira said TNRD was contacted by the fire department and told the service was no longer tenable.

Letters have been sent to each property impacted by the change.

“The biggest thing we’re telling people is that they need to contact their insurance company and notify them, because it will impact [insurance coverage],” Vieira said.

“Every insurance company will treat it differently, but that’s what people need to know.”