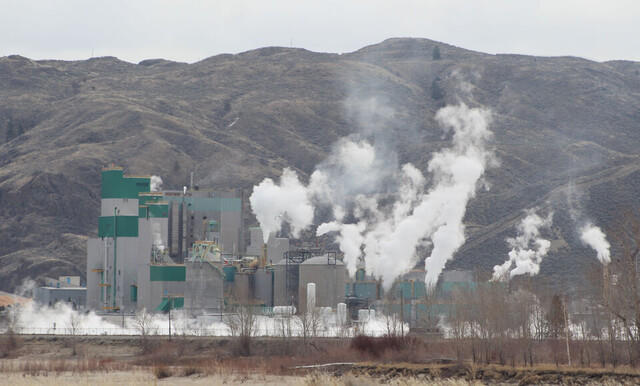 The decision to approve the easement for the conveyor system — which will allow wood chips to be more efficiently transported to the mill — was made during a closed meeting in February.

In a statement, the City of Kamloops said the enclosed conveyor system is a joint business venture with Arrow Transportation and the pulp mill, and will see wood chips transported from Arrow’s River City Fibre chipping plant to the pulp mill.

Ryan Kazakoff, Kruger’s project manager, said wood chips are currently moved using diesel-powered loaders and trucks, and a conveyor system will be better for the environment.

“Use of the conveyor will eliminate unnecessary road trips and result in the reduction of 400 tonnes of greenhouse gas emissions annually,” Kazakoff said.

According to the city, the section of conveyor that will cross Mission Flats Road is just over 20 metres long, 4.5 metres wide and three metres high.

The conveyor system will be installed on an angle across the road, with clearance increasing from north to south. The conveyor will be a minimum of six metres above the roadway.

“The conveyor is installed with shielding to prevent wood debris falling to the road surface, and the snow melt will be controlled through design and use of heat-taped gutters,” Kazakoff said.

Glen Cheetham, the city’s climate and sustainability manager, said in a statement he applauds the project.

According to a memo prepared for the June 14 council meeting, the applicants will be responsible for all repairs and maintenance of the conveyor system, and must prepare a vehicle bypass route to accommodate vehicle traffic along Mission Flats Road during construction.

The decision to approve the easement was unanimously carried by city council.