'Much work' ahead for TteS 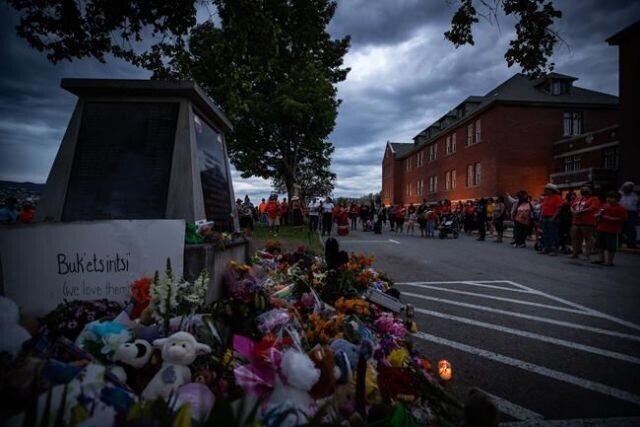 Tk’emlups te Secwepemc Kukpi7 Rosanne Casimir says the band will be balancing science and cultural protocol as it plans next steps in regards to unmarked graves near the former Kamloops Indian Residential School.

After honouring Le Estcwicwey (The Missing) in a memorial event on May 23 — commemorating one year since the probable graves were located — Casimir said some technical work, including archaeology and ground-penetrating radar, will take place on site.

“We are utilizing science to support each step as we move forward. We do have a technical task force that has been put together that consists of various professors, as well as technical archaeologists, and continuing to work with the GPR specialists as well,” Casimir said.

She said as archeological work gets underway, the band will keep communication, respect, honour and dignity at the forefront. She said this is key as the band needs to connect any remains found with their home communities, which may have their own cultural protocols.

“There's going to be a lot of ceremony that takes place. And again, it's going to be whether we go through exhumation to memorialization, when we start getting to some of those steps,” Casimir said.

Alongside archaeologists and other technical specialists, Casimir said the band will be working with provincial and federal government liaisons as well as international experts.

“We have international expertise that are also going to be sharing a bit of guidance as well as we move down the road, and sharing some of their best practices with us,” Casimir said.

“We're going to be inviting other First Nations communities to come in and participate, and to learn and to draw on some of those practices as well because this is something that has not happened in history here in Canada. There is no set of guidelines, no checklists.”

Casimir said the band will honour protocols and will be ensuring they bring in any supports needed to help them move forward.

Casimir said the memorial event on Monday is part of a cultural tradition to honour the children found in the unmarked graves.

“This is our cultural tradition and protocol, after the year of sharing and the loss and going through the emotions of the grief, loss, now we're going to be honouring the ancestral children, The Missing, the 215,” she said.

Casimir said said the memorial is open to all.

“Everyone is welcome, and we want to recognize not only the members of TteS government past and present and the staff for their efforts but all those who have stood by us and joined us in solidarity and supported, to mourn and to grieve,” Casimir said.

She said cultural and mental health supports will be available at the ceremonies for those who need it.

The memorial will be at the Tk’emlups Pow Wow Arbour, with events happening from 5 a.m. until 7 p.m.

More information can be found on the Tk'emlups te Secwepemc website.