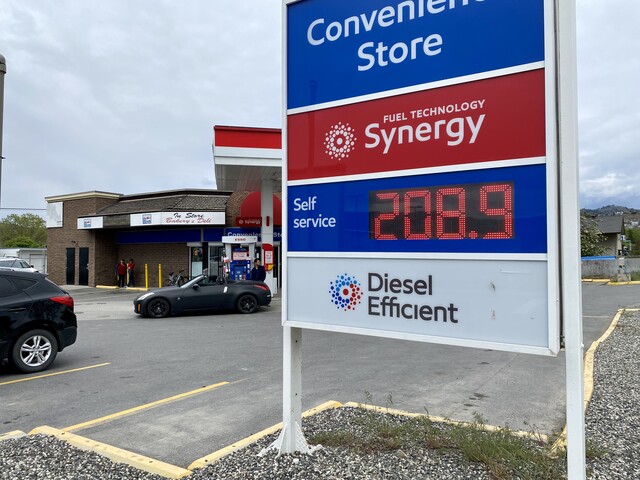 Photo: Tim Petruk
The Esso on Eighth Street in North Kamloops is one of many in the city to show a posted price Tuesday of 208.9 cents per litre.

Most Kamloops gas stations are now charging $2.09 for a litre of regular unleaded, but many retailers are still offering fuel below the $2-mark.

Gas prices shot up in Kamloops on Tuesday to 208.9 cents per litre at many retailers. Castanet Kamloops drove around the city over the noon hour to check prices at 20 gas stations, and 12 of them had a posted price of 208.9.

A handful of city gas stations broke the $2 threshold briefly last week before falling back down into the $1.90s — until Tuesday’s price hike.

On Tuesday, the average gas price in Canada topped $2 per litre for the first time.

Gasoline prices have been elevated since late February when oil spiked to around US$100 a barrel after Russia invaded Ukraine, while the price jumped to over US$110 per barrel last week.

Prices have also been spiking more recently as the reopening of the economy, and the start of the busy travel season, have led to high demand for gasoline that refiners have limited capacity to meet.

According to fuel-price watchdog GasBuddy.com, the average price for a litre of regular gasoline in B.C. is $218.4 cents.

The cheapest gas in Kamloops can be found at Costco, where they will sell you a litre of regular for 188.9 cents.