'Get digits'; Inside a brutal Kamloops revenge beating that turned into a grisly slaying 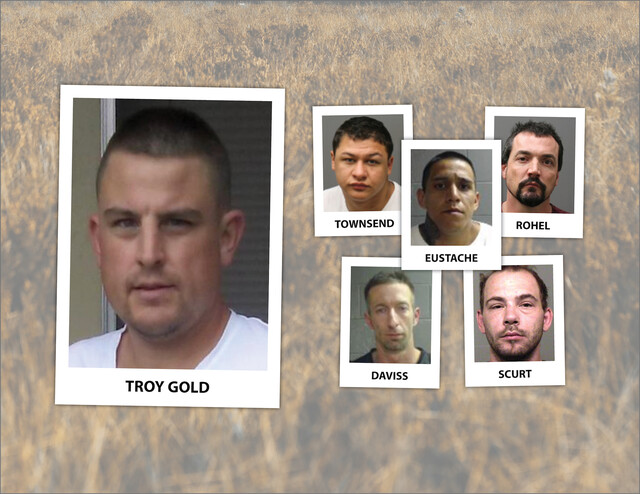 It’s known at the Kamloops Law Courts as the “Five Guys” case — five city men, each of them with ties to gangs or the drug trade, charged with murder in the same slaying.

The men were accused of killing Troy Gold, a 35-year-old career criminal with his own significant links to the local underworld.

The investigation into Gold’s death has been described by RCMP Supt. Syd Lecky as the most complicated probe ever undertaken by Kamloops Mounties.

Scheduling implications — five accused men each planning to stand trial in front of different B.C. Supreme Court juries — brought about a sweeping publication ban that, in some cases, prohibited media outlets from even acknowledging Five Guys hearings were taking place.

The ban was lifted in court on Wednesday following a request from Castanet Kamloops — so now we can tell you what happened to Troy Gold and the Five Guys who killed him.

In the early-morning hours of Sept. 29, 2018, Nathan Townsend’s brand new Mercedes-Benz was set ablaze on the quiet Brocklehurst cul de sac on which he lived.

Townsend, a drug trafficker with ties to organized crime, was no stranger to suspicious luxury car fires. His BMW was destroyed the previous month under almost identical circumstances.

When Mounties arrived to find the Mercedes torched, a constable located a jerry can in the back seat.

The next day, Townsend got a text from an associate claiming to know who was responsible for the blaze. The man pointed the finger at Troy Gold, a 35-year-old drug user and sometimes-dealer who worked occasionally for Townsend and other local criminal bosses.

Townsend was angered after learning of the allegation. An associate, Jason Vaux, said he had to talk Townsend out of heading straight to Gold’s house to confront him.

“Mr. Townsend sought retribution in a plan to beat up Mr. Gold — to ‘fuck him up,’” reads an agreed statement of facts filed in B.C. Supreme Court earlier this month, a copy of which was obtained by Castanet.

Townsend assembled a team of thugs — Jayden Eustache, Darian Rohel and John Daviss — and told them to beat up Gold. The trio worked for Townsend; Eustache did enforcement and debt collection while Rohel and Daviss sold drugs.

Townsend told Eustache and Rohel to “get digits” — meaning to bring back one of Gold’s fingers to confirm the beating had been carried out.

On the afternoon of Oct. 1, the men — along with Sean Scurt, another local drug dealer who was friends with Rohel and Gold — picked up Gold from his house.

Court heard Eustache and Rohel lied to Gold to get him to join them, telling him they needed his help roughing up another colleague. When Gold asked whether he should bring his gun, he was instructed to leave it at home.

The men drove with Gold to the Lac du Bois area north of the city. When the men got out of the truck, Gold was suspicious and began to walk away from the group. Eustache offered him a cigarette to calm his nerves and then attacked.

“Shortly after arriving, Mr. Eustache levelled a surprise attack on Mr. Gold with an aluminum baseball bat, delivering multiple blows to his head, legs, arms and torso,” the agreed statement of facts reads.

The beating was exceptionally violent. Court has previously heard details about Gold pleading for his life while his friend, Scurt, tried to console him, telling him it would be over soon.

“Rohel, Daviss and Scurt also participated in the beating. They assisted in severing one of Mr. Gold’s fingers,” the agreed statement of facts reads.

“When Mr. Gold was moaning and incapacitated, the group removed his pants and shoes, put them in the truck and left Mr. Gold in the grasslands.”

Rohel slipped Gold’s severed finger into a black sunglasses bag to take to Townsend, and the men departed.

Gold’s skull, spinal column and leg bones were found by police 12 days later, about 800 metres from where he’d been left to die.

“Evidence of blunt-force head trauma in the context of incomplete skeletonized remains with animal scavenging,” is what the autopsy report listed as the cause of death.

The men told Townsend what happened and Rohel showed him the severed finger.

Some of the men discarded their bloody clothes in a trash bag in Townsend’s garage. Eustache was driven to Aberdeen Mall, where he bought a new outfit at Foot Locker — instructing a clerk at the store to throw out some of the clothes he'd worn in.

Townsend then took Eustache and Vaux out for dinner at the Boston Pizza on Victoria Street. At the restaurant, Eustache offered more detail about the beating. He said Gold turned into “a little bitch” when the attackers used bolt cutters to remove his finger.

While still at Boston Pizza, Townsend texted Rohel and Daviss and told them they could take money off their drug debts — $500 and $250, respectively — as thanks for the beating.

Gold was reported missing two days later and Mounties quickly set their sights on Townsend, executing a search warrant at his home on Oct. 8.

The summer of 2018 was a tumultuous time for Townsend, a former associate of Red Scorpions founder Konaam Shirzad, who was gunned down himself outside his Guerin Creek home the previous fall.

Townsend was released from prison on June 30, 2018, after serving a sentence for drug trafficking.

Less than two weeks later, he walked into the emergency room at Royal Inland Hospital with stab wounds — an attack police believe was carried out by a rival drug dealer. Townsend did not co-operate with Mounties and no arrests were made.

When police searched Townsend’s home a week after Gold’s slaying, they are alleged to have found a nine-millimetre handgun and $70,000 worth of drugs hidden around the house.

Four of the Five Guys have pleaded guilty to reduced manslaughter charges and the fifth was acquitted.

Jayden Eustache, 27, is the last of the Five Guys to be dealt with by the courts, and the only one awaiting sentencing. He pleaded guilty in B.C. Supreme Court on Wednesday morning to one count of manslaughter. Prosecutors are considering whether to seek a dangerous offender or long-term offender designation for Eustache. He remains behind bars and will return to court on April 25 to set a date for sentencing.

Darian Rohel, 47, pleaded guilty on July 28 to one count of manslaughter. He was sentenced to seven years in federal prison.

Sean Scurt, 50, pleaded guilty to one count of manslaughter on Aug. 30. He was sentenced on Dec. 17 to four years in federal prison.

John Daviss, 41, was found not guilty on Nov. 5 following a judge-alone trial in B.C. Supreme Court on a single count of manslaughter. Justice Dev Dley said the Crown's evidence wasn't enough to convince him Daviss was much more than a bystander.