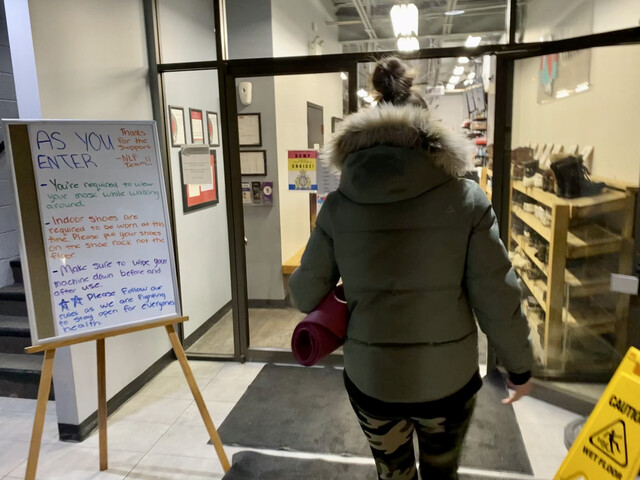 Photo: Tim Petruk
A patron enters No Limits Fitness on Eighth Street on Wednesday night. The gym is one of five in Kamloops refusing to close under the latest B.C. public health orders.

A group of Kamloops gyms refusing to comply with the latest public health order requiring they temporarily shutter to curb the spread of the highly transmissible Omicron variant of COVID-19 have vowed to stay open until government officials show proof the virus has been spreading inside fitness facilities.

“Show me the information. Show me how you came to that decision. And if it makes sense, then yeah, we’ll close. If it doesn’t make sense, then no we won’t.”

Grover, a co-owner of No Limits Fitness, speaks on behalf of a group of five Kamloops gyms remaining open in defiance of a public health order that came into effect a few days before Christmas — one requiring every fitness facility in B.C. to close until Jan. 18 at the earliest.

According to Grover, No Limits, Gold’s Gym, Anytime Fitness, Lady’s Only and Strength Camp remain open in defiance of the order.

B.C. provincial health officer Dr. Bonnie Henry was asked this week about the gyms refusing to close. She reiterated that fitness facilities have been the source of COVID-19 spread at various points throughout the pandemic — especially when community transmission is high, like it is now with Omicron.

Henry said gyms are a high-risk setting for spread given what’s going on inside them.

“It’s the same with travel, it’s the same with certain industries that are higher-risk industries. And when we have a lot of transmission in our community, we have repeatedly seen gyms become amplifiers and we have a number of examples of that we’ve put out information on.

“I can’t tell you every single case that’s been linked to a gym, but we can tell you that we’ve seen this as a pattern — that these are environments that are higher risk.”

No Limits received a warning last week from Interior Health requesting the facility comply with the order and close its doors.

“Our office will be following up to determine your compliance with the requirements outlined above,” the letter reads.

“If you are found to be in non-compliance, a violation ticket will be issued. Continued non-compliance will result in further enforcement action, which may include suspension of licences, permits and/or ordered closure.”

Grover said he’s not intimidated by the letter and he won’t be closing his gym — at least not until he's satisfied the government has shown its cards. He said he’s filed an FOI seeking the information relied upon by health officials in deciding to shutter B.C.’s fitness sector.

“Until we get an FOI back on how they came to that decision, we’re going to keep operating our business because we’re not breaking any laws,” he said.

According to Grover, more than 250 gyms in B.C. have now joined in on the defiance.

“Some have received letters and some have not,” he said.

“Some have received bylaw officers and some have not. Some have had RCMP come and some have not. We, as a group, have collectively come together. We’ve got our own internal communication system. There’s more than 250 of us, and we’re standing up until they give us the information that we’re seeking.”

Grover said he feels for Henry and B.C.’s health officials, but he refuses to close his doors without further explanation.

“I understand where she’s coming from,” he said.

Copies of the warning sent to No Limits were also sent to city hall and to the Kamloops RCMP detachment.

“Community services responds to all complaints that come through our office,” she said.

“To date, community services has not received any complaints through our office regarding any of the gyms refusing to close.”

Blundell said city officials will visit the gyms if they receive a complaint. In such a case, she said, steps would be taken to educate the owners about the orders and the impacts of non-compliance.

“We would then forward the complaint to Interior Health,” she said.

“The city is not involved with issuing violation tickets.”

IH told Castanet health officials have been in contact with 15 gyms and issued five warning letters since the latest order came into effect.

“Further steps will be taken for gyms who remain open despite initial enforcement actions,” IH spokesperson Karl Hardt in a statement.

— with a file from Kristen Holliday