Some neighbours leaving over North Shore shelter, others want seat at the table 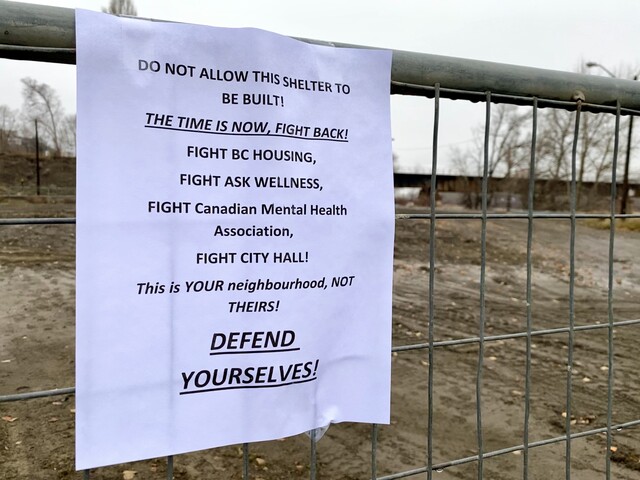 Photo: Tim Petruk
Signs opposing a proposed shelter at Kingston Avenue in North Kamloops were found on Monday afternoon. It's unknown who posted the signs.

Weeks after BC Housing announced the planned construction of a homeless shelter on a city-owned lot in North Kamloops, some Westmount and Schubert residents have come forward with concerns about the decision, saying they want a seat at the table.

Rose Roy, who co-owns a business on Kingston Avenue, near the proposed site of the Moira House shelter, said she believes there should be consultation with business and residential communities to solve issues of homelessness and addiction.

“I think what's happened is that everyone's been left out. And BC Housing is allowed to command — for lack of better words — the process.”

Roy said the first she heard of the shelter announcement was on Nov. 9, and since then, she hasn’t been able to get any further concrete details from BC Housing, just receiving “cut-and-paste” responses to her questions.

A report from two closed council meetings released in advance of city council’s Tuesday meeting shows that council voted in favour authorizing the Kingston Avenue lease to BC Housing on July 20.

According to the report, the province is leasing the land for $1 per year for three years, with the option to extend the lease for two one-year terms.

“They had discussions and decisions [were] made around the shelter locations without consultation or advance discussions,” Roy said.

“The school community knew nothing about it either, and there are two schools in very close proximity to this site. I think in all fairness, there should have been some discussion with the various communities in that particular area.”

Roy’s sentiment is shared by Dennis Hayes, a Westmount resident who penned a letter to the city and BC Housing on behalf of a number of community members with concerns in the wake of the province’s announcement.

Hayes said there is good expertise in the city that should be tapped so the city can provide better long-term solutions for people living rough.

“We want community engagement. We want evidence based programs created by local experts to support our vulnerable citizens. We want to have a seat at the table,” Hayes said.

Hayes said he was shocked to see the shelter planned for the Kingston Avenue location, which he says is 100 metres from a daycare, 20 metres from a community park, between two elementary schools and “miles from any support services.”

It’s a concern shared by Roy, who said she wants to see rationale from BC Housing regarding why it chose the Kingston site.

“I keep having visions of our people that are experiencing homelessness making their way to the shelter, and the shelter is full. And they've made it all the way out there. What are they going to do next,” Roy said.

Carmin Mazzotta, the city’s social, housing and community development manager, said there have been discussions about non-profits working together to operate a shuttle service to proposed shelters on Kingston Avenue and in Sahali, at the former Greyhound bus depot.

“I think a point that needs to be considered is that there are people experiencing homelessness who do frequent the riverbanks along the Rivers Trail and that area of the community, and don't currently have access to a shelter,” Mazzotta said.

“The shelter system will be able to provide a shelter space for some of those folks, as well.”

Roy said she believes there are some well-run supportive housing facilities in the city, but after hearing stories from business owners near the temporary shelter at Memorial Arena, she is also concerned with the potential for an increase in crime, vandalism, trash and discarded needles.

Tamie Yurkiw-Braaten, a resident in the Schubert area, said she purchased her home in the area partly because of its access to recreation, but she doesn’t feel safe walking alone in the area due to crime and social issues concentrated near Rivers Trail.

Yurkiw-Braaten said she started to cry when she received a letter saying a shelter was planned for Kingston Avenue.

“I feel so defeated as a hard-working honest, taxpaying citizen of this city. I feel so thrown under the bus, that we don't matter,” she said.

She said she doesn’t believe that the shelter will clean up the area along Rivers Trail, but might increase vandalism, break-ins and theft.

Yurkiw-Braaten said she and her husband are now thinking about leaving Kamloops.

Other Westmount and Schubert residents have also spoken out against the shelter location. As of Monday evening, a change.org petition opposing the shelter has received 845 signatures in three days.

“We recognize the need for more available beds in Kamloops for our homeless population. But we ask that this project be moved to a more suitable area, not right in between two family oriented neighbourhoods,” the petition reads.

“We do not welcome the unwanted activities that surround our local shelters. We need a better solution!”

On Monday morning, a fence surrounding the Kingston Avenue property was plastered with signs reading “Do not allow this shelter to be built! The time is now, fight back.” A significant portion of the fencing had also been toppled over.

It is unclear at this time who is responsible for putting up the signs.

When contacted on Monday afternoon, Coun. Kathy Sinclair said she wasn’t aware of the signs, but said it’s important to remember there are about 100 unhoused people in Kamloops that need a roof over their heads.

“As a North Shore resident, I can empathize and I can appreciate the concern, but to us at the council, by and large, it's really important to give folks a place to go. It’s for their safety, and it's for the good of the whole community,” Sinclair said.

“Unfortunately, it seems that nobody really wants a homeless shelter or subsidized housing or supportive housing in their neighbourhood, but it has to go somewhere. So in this case, BC Housing has moved forward with this location and as a whole, council supports it.”

Mazzotta said there are three virtual information sessions planned for the community to attend and ask questions of the city, BC Housing, and Canadian Mental Health Association — who will be operating the facilities.

A session for the shelter at Stuart Wood will be held on Dec. 7, the Kingston Avenue property will be addressed on Dec. 8, and the Greyhound Bus depot shelter on Dec. 15.

“It'll be an information session to talk about the need for shelter space, how will operate,” Mazzotta said.

“The city will be there to speak about the process, how it came to be, and then there will be time for attendees to ask questions about the project.”

Mazzotta said residents can register on the BC Housing Let’s Talk pages for the sessions.