One death in Hwy 5 crash 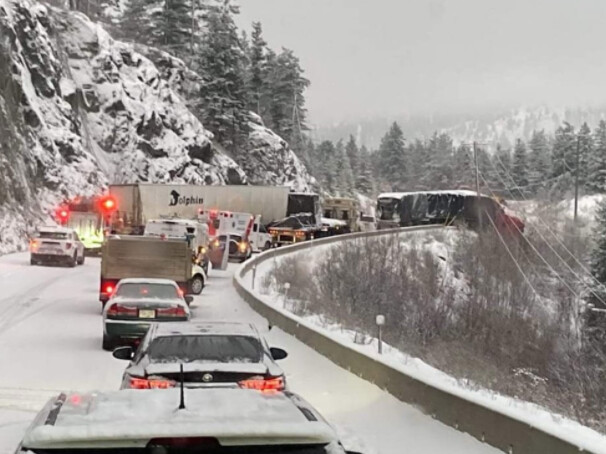 One person has died and another suffered serious injuries as a result of a four-vehicle collision near McLure on Wednesday afternoon.

According to police, at about 3 p.m., a transport truck travelling northbound on the Yellowhead Highway collided head-on with a southbound transport truck just north of the Fish Trap Rest Area.

Two other vehicles were also involved in the crash.

Police with BC Highway Patrol said the driver of the northbound semi had serious but non-life threatening injuries, but a passenger in the truck — a woman in her seventies — died in the collision.

The driver of the southbound semi was uninjured, and the drivers of the secondary vehicles had non-life threatening injuries, according to police.

While the cause of the collision is still under investigation, police said they believe road and weather conditions were contributing factors.

“BCHP recommends that motorists drive according to the road and weather conditions, have suitable winter tires and carry or use chains when required,” police said in a statement.

A 3.7 kilometre stretch of Highway 5 was closed for nine hours as police investigated the scene and ensured the road was safe for other vehicles. DriveBC reported the crash scene was cleared just after 5 a.m. Thursday.

Anyone with information related to the crash, including those who might have dash cam footage showing either truck before the accident, is asked to contact BC Highway Patrol in Kamloops.

DriveBC reports the crash scene south of Barriere was cleared as of about 5:15 a.m.

BC Emergency Health Services says two people were taken to hospital after a crash on Highway 5 near McLure.

Three paramedic units, a paramedic supervisor and a community paramedic who was in the area responded to the scene at about 3:15 p.m.

The highway remains closed in both directions.

DriveBC reports its next update is due at 8:30 p.m.

Emergency crews were called to a stretch of Highway 5 near McLure at about 3:30 p.m. for a report of a crash involving two semis.