The Coldwater River in Merritt has forged a new course down a street in the west end of town — a problem presenting unexpected “complexities” to municipal officials.

“The river has basically dropped one block to the west above Hicks Avenue,” Greg Lowis, head of the City of Merritt’s emergency operations centre, told Castanet.

“Unfortunately, the river is now where it wants to be. We can’t reroute it, so we’re going to have to manage this.”

Lowis said the river now runs along Pine Street north of Hicks Avenue — and there’s not much anyone can do about it.

“I’m not an engineer or a hydrologist, but my understanding of rivers is that once they’ve moved, trying to get them back to where they were is a bit of a fool’s errand,” he said.

“It definitely adds some complexities.”

Lowis said engineers made progress on Wednesday in Merritt, assessing the city’s critical infrastructure. One bridge has since been reopened, allowing access to Collettville, and assessments are still underway at the city’s wastewater treatment plant.

According to Lowis, there is still no update on when evacuees might be able to return to Merritt. The evacuation order was put in place on Monday morning, and evacuees have been told to expect to remain out of the community for more than a week. 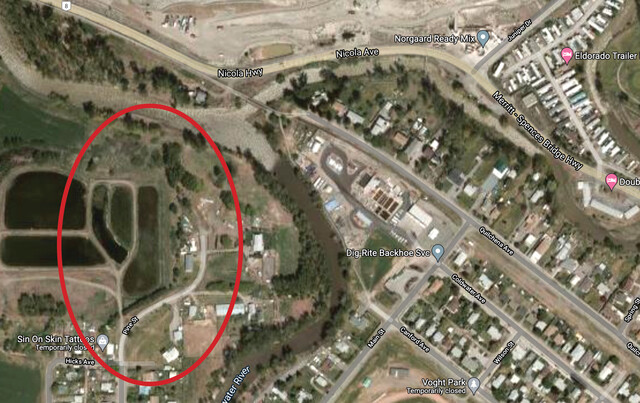 Photo: Google Maps
The circled area on this map shows where the Coldwater River has altered its course in Merritt, travelling along Pine Street north of Hicks Avenue, according to the city.