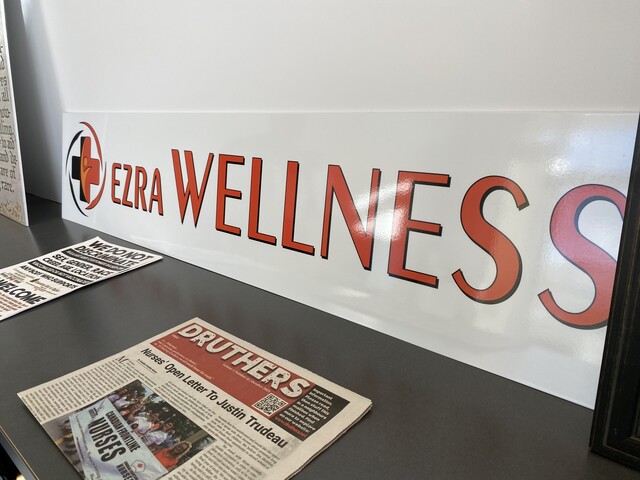 An unvaccinated nurse who opened a user-pay wellness clinic this week in North Kamloops says plans are in place for similar storefronts to debut soon in Kelowna and Salmon Arm.

He said it’s not a medical clinic and it does not offer medical care.

“At best, I’d say consultation. A lot of it is just we evaluate, we have a discussion and we see where we can go and what might potentially work,” he said.

“So if you came in and you had questions, we would help place you or point you in the direction of what we think — collectively, you and I — would be best, through all modalities like massage, nutrition, naturopath, Western medicine. It's whatever we think would help you, even personal trainers.”

Interior Health confirmed it is aware of Ezra Wellness, but a spokesperson said IH “does not oversee private clinics providing medical services." The health authority said anyone working in healthcare has to follow provincial rules — and anyone caught breaking them could be penalized.

“All individuals providing medical care in B.C. are required to comply with the BC Health Professionals Act,” IH said in a statement to Castanet.

“If we receive information about a clinic that may be operating outside of this, we will report individuals involved to their respective professional regulating bodies — the BC College of Nurses and Midwives for nurses and BC College of Physicians and Surgeons for physicians.”

IH said any concerned individual is free to file such a report.

According to Aalderink, Ezra Wellness has another location in Grand Forks and is about to open clinics in Kelowna and Salmon Arm. Others are in the works, he said, in Langley, Northern B.C., Alberta, Ontario and Australia.

Aalderink said Ezra Wellness has 89 workers available in Kamloops, approximately 70 of whom are trained as healthcare workers — people he said lost their jobs when the province’s new vaccine rules for came into effect earlier this week.

Aalderink said the business model is still being ironed out, but Ezra Wellness is intended to be a user-pay facility. It is operating right now out of Tranquille Road retail space donated by the owner of The Printing Place.

The clinic is currently accepting payment by donation, but Aalderink said he hopes to find a happy medium for pricing.

“Hopefully we find somewhere in the middle that our local economy can tolerate,” he said.

“Because I want to be able to treat the homeless guy that needs a cut taken care of as well as somebody in Juniper Ridge that’s got a child with a fever.”

Aalderink said he envisions Ezra Wellness filling a gap for those who want to use its services.

“An ounce of prevention is worth a pound of cure,” he said.

“If we can get them early, we could stop the hospital from necessarily being so full.”