“Remember ... what you are doing this for, and hang on to it every single day, because they are tearing us down, bit by bit, one by one, day by day," Delwo told a crowd of about 150 people before the march began.

"Don’t lose sight of your why."

Hundreds more gathered the group and about 1,000 protestors lined Columbia Street and marched to Royal Inland Hospital on Third Avenue.

Few masks were seen in the crowd, which included many children.

However, not all in the crowd were protestors.

Kyle Trarup said he took issue with the location of the protest, as nurses and doctors at Royal Inland Hospital are already exhausted and overworked, their jobs made more difficult due to the COVID-19 pandemic.

“My stance on what’s going on right now is very simple,” Trarup said.

“These people have every right to protest, they do. But to protest here in front of a hospital, which is full of sick, injured and dying people and overworked staff that are quitting non-stop because they are so stressed, is idiotic, it’s rude — and it’s insulting to everybody.”

The event began just before 12:30 p.m. near the Peterson Creek trailhead with a speech from Kamloops-Thompson-Cariboo People’s Party of Canada candidate Corally Delwo.

Delwo said she was impressed with the turnout.

“Every one of you is here today in our personal power, and we cannot comply anymore,” Delwo told the crowd prior to the march.

“We have a job of saying no. You’re the only way this is going to end.”

Police are also on scene at the march 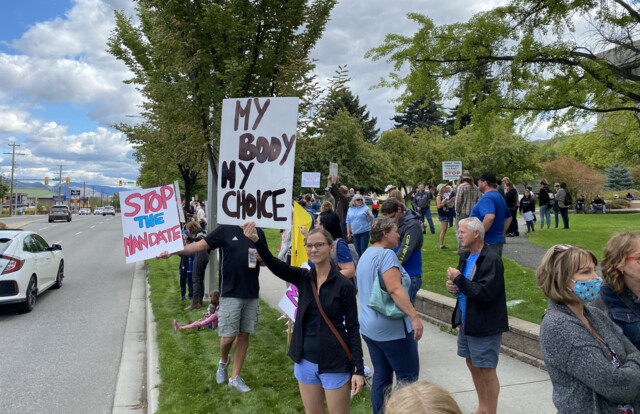