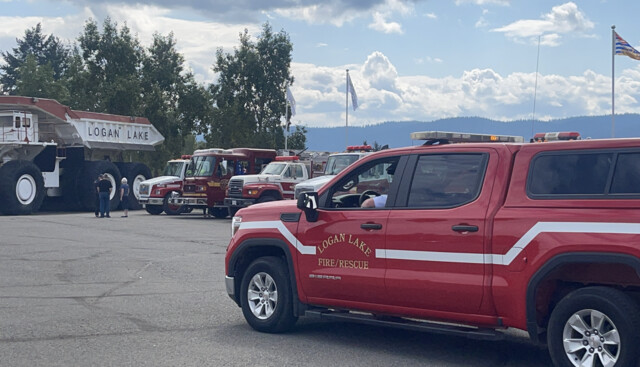 Photo: Sydney Chisholm
Logan Lake residents return to the community on Aug. 19, one week after they were ordered to evacuate.

Logan Lake is being touted as a shining example for other communities to emulate after years of fire planning helped save it earlier this month from a fast-moving wildfire.

In 2013, Logan Lake was the first community in Canada to be designated FireSmart. Eight years later, Mayor Robin Smith said Friday, that ground work is part of the reason why the community is still standing.

“We are more than happy to share our story,” Smith said.

FireSmart is a program designed to help Canadian communities protect themselves from the threat of wildfire. The program partners with wildfire researchers to provide tools to help communities take proactive steps. Logan Lake was one of the program's early adopters.

In Logan Lake on Friday, Smith met with Premier John Horgan and Forests Minister Katrine Conroy — both of whom praised the community for its work in recent years.

Conroy said she plans to take the FireSmart message from Logan Lake to other B.C. communities.

“We want to reach out to communities across the province as an example of what can work,” she said.

“It is well worth it. We’ve definitely seen results here.”

Logan Lake was evacuated on Aug. 12. Two days later, on Aug. 14, the Tremont Creek fire burned into Logan Lake’s municipal limits, but no structures were lost after firefighters worked throughout the night to fight the flames.

Residents were allowed to return home late last week and received the all clear on Wednesday.

To date, most FireSmart programming in B.C. has been funded through government grants. Speaking in Logan Lake on Friday, Horgan hinted at potential funding in the future to help implement FireSmart strategies in B.C. communities.

FireSmart preparedness includes steps like clearing potential fuels from near structures and keeping combustibles in a safe place. Strategies come from leading experts in wildfire mitigation.

In Logan Lake, many homes include a sprinkler system that sprays water on the roof — systems that can be activated when a fire is approaching.