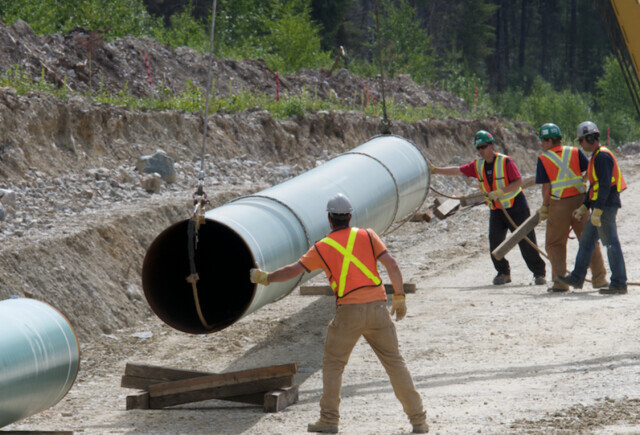 A pair of protesters have locked themselves to Trans Mountain equipment in the North Thompson, according to an anti-pipeline group.

In a video posted to the Braided Warriors Instagram page, RCMP officers and Trans Mountain security officials can be seen, as well as Simpcw security.

The Braided Warriors and Tiny House Warriors are holding a ceremony close by for the support of the two individuals.

Since the pipeline expansion work began, some First Nations groups have fought against it, calling themselves land defenders. The Braided Warriors describe themselves as Indigenous youth "defending the land and the people from capitalist colonial violence."

The two protesters are quoted on the Braided Warriors Instagram page: "We are in solidarity with the Secwepemc people in their fight to stop foreign invasion of their lands and protect their lands, waters, animals and peoples. As settlers it is our role to be accomplices to Indigenous land defenders and put ourselves on the line to stop the ongoing colonization of Indigenous territories and peoples. This pipeline will affect all of us and all future generations, but first and foremost will impact the nation's and peoples along this route, including Secwepemc people. Today we stand on unceded, unsurrendered, illegally occupied Secwepemc land to show that we will not stop until the pipeline is terminated and the land is returned to the rightful title holders.”

Two accomplices of Tiny House Warriors and Braided Warriors are locked down to equipment at TMX pumping station in unceded Secwepemc territory. pic.twitter.com/n41nkjVmHr