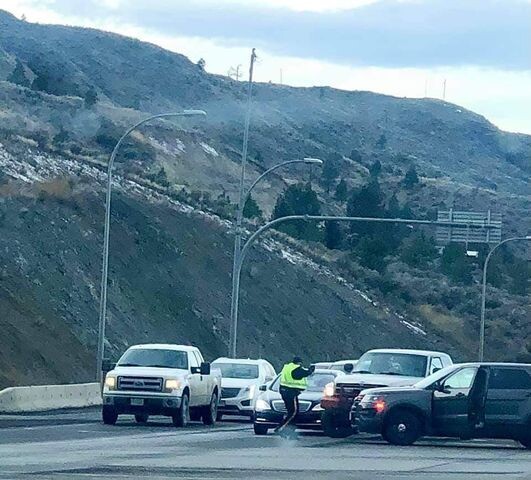 Photo: Nathan Ritchie
Police stop traffic on Summit Drive on Tuesday while attempting to track down a suspect.

One man is in custody after a wrong-way demolition derby turned into a foot chase through a downtown Kamloops neighbourhood that caused schools in the area to briefly lock down.

According to police, the incident began over the noon hour when a man allegedly stole hundreds of dollars worth of merchandise from a store on Notre Dame Drive before fleeing through an emergency exit and into a waiting truck.

“While patrolling the area, frontline officers located the vehicle and requested the assistance of the RCMP Air Services helicopter to help maintain a visual on the truck as it drove erratically through the city,” she said.

Evelyn said the truck at times drove into oncoming traffic and collided with at least one other vehicle.

The truck eventually came to rest in a ditch.

“Schools in the area were contacted and placed into a hold and secure while police tracked the suspect.”

The man was found by a police dog hiding in a compost bin in the Sagebrush neighbourhood, Evelyn said.