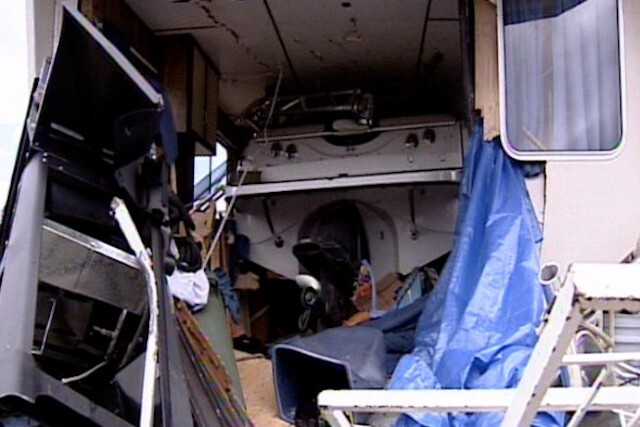 Photo: Castanet News
A boat driven by Leon Reinbrecht ended up inside a houseboat, killing one and injuring eight.

The man who crashed a speedboat into a houseboat on Shuswap Lake in 2010, killing the operator of the houseboat, has been granted full parole, after serving less than two years of his three year sentence.

Reinbrecht appealed the conviction immediately, but the appeal was dismissed in January 2019. He remained in prison from January 2019 until he was granted day parole last July.

On July 3, 2010, Reinbrecht was driving his speedboat on Magna Bay after watching a fireworks display. Witnesses reported he had been drinking and smoking cannabis through the day, and said he'd been driving the boat recklessly.

“You were observed to be travelling at speeds of between 30-40 miles per hour while you performed zigzags, 'donuts,' and 'u-turns' on the water as part of a joyride for about 10-15 minutes,” the Parole Board of Canada noted. “Your activities reportedly brought you close to other boats and caused concern for their safety.”

After one high-speed u-turn, Reinbrecht crashed into a houseboat, killing the boat's driver, Ken Brown, and injuring eight others. Reinbrecht's boat ended up completely lodged inside the houseboat.

The Parole Board noted that at the time, Reinbrecht denied he'd been driving recklessly, denied he was intoxicated and said several people had lied about the incident in court.

But the Parole Board said Reinbrecht has since shown accountability for his actions and followed all of his conditions while on day parole.

“The Board has not lost sight of the serious nature and severity of your index offending where a life was lost and its impact on the victim's family,” the Board said.“You have demonstrated the ability to live pro-socially with no indications of high-risk behaviour.

“Overall, the Board is satisfied you have continued to make gains in your progress towards your reintegration, and that it is the Board's assessment that your full parole release will not pose an undue risk to the society and that it will also contribute to the protection of society by facilitating your reintegration into the community as a law-abiding citizen.”