Casey, originally from Halifax, was the team's Public Affairs Officer, while MacDougall, from New Brunswick, was one of the team's co-ordinators and the pilot of the crashed jet.

"The Snowbirds’ Op INSPIRATION brought joy to Canadians across our country," General Jonathan Vance, Chief of the Defence Staff, said in a statement. "Today, we come together in their time of need. To the family of Captain Jenn Casey we send our condolences, know that she was an inspiration to many and she will be missed. To Captain Richard MacDougall, we wish you a speedy recovery.”

Cpt. Casey had joined the Snowbirds in November 2018. Prior to joining, she spent several years working in broadcast radio as a reporter, anchor, and producer in both Halifax, N.S. and Belleville, Ont.

As a result of the crash, the Snowbirds CT-114 Tutor fleet has been placed on "operational pause" and Operation Inspiration has been delayed indefinitely.

"A flight safety investigation will be conducted to ensure our personnel can continue to have confidence in our equipment and procedures," the Department of National Defence said in a statement Sunday night.

"One of the aims of the flight safety program is to investigate such occurrences with the objective of quickly identifying effective preventive measures that will either prevent or reduce the risk of similar occurrences in the future.

A Royal Canadian Air Force flight safety team will fly from Ottawa to Kamloops to investigate the circumstances of the crash. 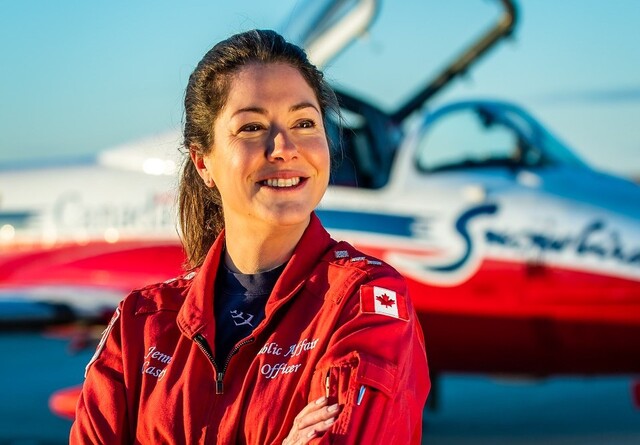 The fatal victim of the Snowbirds crash in Kamloops has been identified as Capt. Jennifer Casey, sources have confirmed to Castanet News.

Casey was the public relations officer for the Snowbirds.

Her family has been notified of the crash.

Her biography says she joined the Canadian Armed Forces in August 2014 as a direct entry officer. Prior to joining she spent several years working in broadcast radio as a reporter, anchor, and producer in both Halifax, NS and Belleville, ON.

She joined the Snowbirds in November 2018.

The Canadian Forces have said that the other person involved in the crash did not sustain life-threatening injuries.

One member of the Snowbirds team was killed when a single Snowbirds plane crashed into Kamloops' Brocklehurst neighbourhood Sunday, while another suffered serious injuries.

"It is with heavy hearts that we announce that one member of the CF Snowbirds team has died and one has sustained serious injuries," the RCAF wrote.

They have contacted all primary family members of those involved.

Prime Minister Justin Trudeau says he's been in touch with Harjit Sajjan, Canada's National Defence Minister, and that his thoughts are with the brave members of Royal Canadian Air Force. In a tweet, he says the air force will provide an update as soon as possible.

In a second tweet, Trudeau went on to thank emergency personnel in Kamloops, "who responded so quickly to this tragic incident."

Mayor Ken Christian and Fire Chief Mike Adams will be holding a media briefing at 4:45 p.m. outside city hall, to talk about the crash.

Castanet will carry the event live.

We will also update this story with additional information.

Police are asking the public to refrain from getting near the scene. That includes Glenview Avenue, Crestline Street, Schreiner Street and Tranquille Road.

"This is a dynamic situation and we're unable to confirm status or injuries at this time," says Cpl. Jesse O'Donaghey in a statement. "The RCMP will be working with other safety and regulatory agencies to determine the cause of the crash."

Kamloops RCMP are asking anyone who captured the incident on video to call them at 250-828-3000.

The City of Kamloops has issued a statement.

In a press release, staff say the aircraft went down at around 11:40 a.m. shortly after takeoff.

"The crash impacted a residential home, resulting in a structure fire," the release says.

"Kamloops Fire Rescue (KFR) crews arrived on scene in approximately five minutes and currently there are 14 KFR personnel and five apparatus onsite. KFR is working closely with assisting agencies including the RCMP, BC Ambulance, the YKA crash truck, airport authorities, and military representatives," reads the statement.

The city adds more information will be available as soon as possible.

Witness accounts of a Canadian Air Force Snowbird crash in Kamloops on Glenview Avenue continue to come in. It is believed there were two occupants of the plane when it crashed, but BC Health Minister Adrian Dix said in a tweet one person has been transported to hospital.

Kenny Hinds, who lives in a house seven doors down from the crash site, said it looked like the living room of the house where the crash occurred was on fire.

"I just started running down the street. And I got there maybe a minute after it crashed and there was a couple of residents that had their hoses out and they were trying to put the flames out because it hit a house," he said. "It looked like most of it landed in the front yard, but maybe a wing or something went through the roof perhaps."

"So there was a bunch of people running around trying to see if we could get into the house to see if anybody's OK."

Marni Capostinsky said she lives across the street from the crash site and was out on the deck when she heard the plane getting closer.

"We ran out under the cover to look and saw something black coming towards us, everyone hit the deck it was so loud," she said.

Capostinsky said there were large flames flaring on and off and a strong toxic smell filled the air.

She said her son immediately ran out with a hose and neighbours tried to help before first responders arrived.

"It was really scary but good to see everyone trying to come together," Capostinsky said.

Hinds had been watching the aircraft after hearing them take off, and said he was able to see the crash.

"I heard 'bang, bang,' and just as I looked before it left my view from the house beside me, I saw the Snowbird going straight down," he said. "I saw what looked like a parachute about, say, 20 feet over the house, and it disappeared from sight, and the parachute hadn't fully deployed yet — it was still sort of straight up and down."

In a tweet, he says one individual was transported to hospital following today's crash. It is believed there were two occupants of the aircraft.

"Our thoughts are with all affected during this difficult time," he writes.

Late this morning @BC_EHS received multiple calls about a plane crash near the Kamloops airport. Paramedics and air ambulances were dispatched and one individual was transported to hospital. Our thoughts are with all affected during this difficult time.

I am deeply saddened by the news of today’s @CFSnowbirds crash & my thoughts are with all those involved. The @CanadianForces are working with local authorities & will update as information becomes available. I would like to thank local first responders for their ongoing support. https://t.co/eSqBomSkPh

The Royal Canadian Air Force has released a brief statement regarding the Canadian Forces Snowbirds aircraft that crashed in Kamloops.

"This is a developing situation. Our priority at this time is determining the status of our personnel and supporting emergency personnel. When appropriate, more information will be made available."

They thanked the emergency crews that are providing ongoing support at the scene.

Resident Cory Pelton posted a video on his Facebook page showing the two Snowbirds taking off from the Kamloops Airport and films the one that eventually crashes.

Before the plane hits the ground you're able to see two occupants eject from the plane.

Still no word on injuries to those in the plane and any residents around the area where the plane crashed.

*Disclaimer: the video posted below has profanity*

Kim Maloney tells Castanet that about 30 minutes ago she heard the Snowbirds flying over her house and she decided to head out to watch them takeoff when she heard "an earth shaking bang and instantly smoke."

Fellow neighbour Tammy Franzman was outside doing something and saw the two planes loop around. Once she noticed one crashed she called 911 but couldn't get through because it was busy.

"The two planes took off together, they climbed - I don't know how high - the one really climbed and the other one started to spin and then boom. I didn't see the pilot bail out but he bailed out late apparently."

It is confirmed that a single Snowbird plane has crashed in Kamloops a couple of blocks from the airport.

Air Force, ambulance, police, fire crews and BC Hydro are on scene.

One person is being rescued off of a roof at this time.

Emergency crews are currently at the scene.

No word on any injuries at this time.

The Snowbirds were supposed to fly over the Thompson-Okanagan region this morning but due to the weather advisory they cancelled their flight.

Castanet has a reporter on the scene and will update this story once more information becomes available. 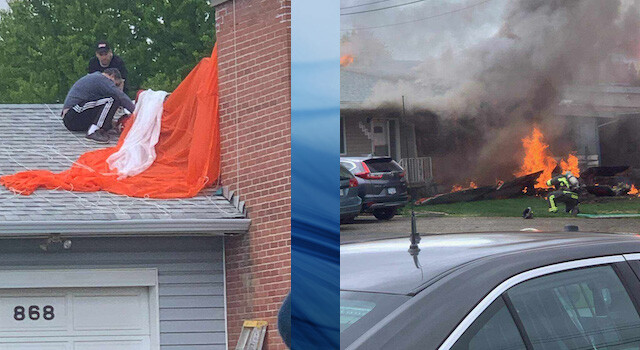 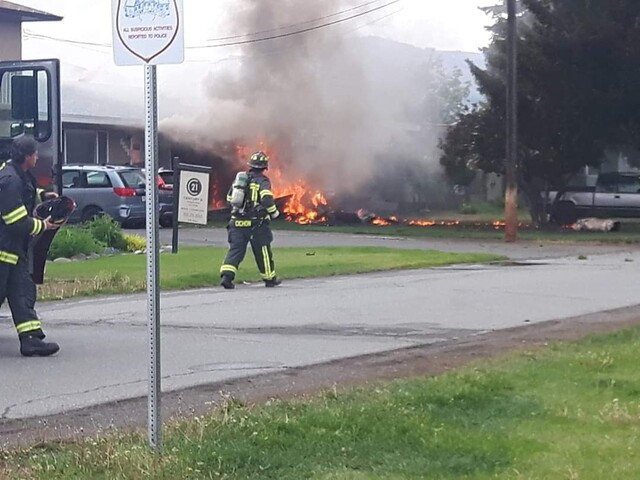