Honour Ranch offers respite for people in uniform and their families 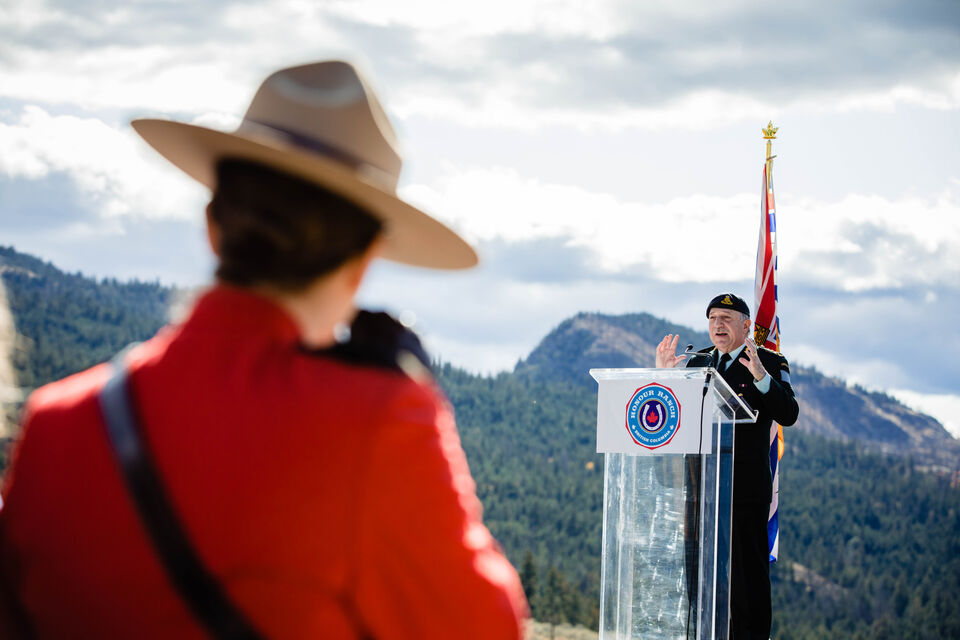 More than 300 people gathered in Ashcroft today (Oct. 5) to celebrate the opening of Honour Ranch.

The 120-acre property provides members of the Canadian Armed Forces, first responders, veterans and their families a place to heal and recover from operational stress injuries, like PTSD.

While receiving treatment at the facility, guests stay at one of 10 cabins on site. (Construction on another 10 cabins is expected to start in the spring.)

Program participants (programs will be tailored to each individual) take part in educational workshops and a series of treatment programs using natural, agricultural and environmental therapies. "The programs will be run by outside agencies, to help our men and women. They will be offering peer support, one on one. Sometimes it'll be family therapy, or group therapy. What works for the individual best. That's so important," says Allan De Genova, president of Honour House Society, noting there's no cost to attend.

Honour Ranch, expected to be fully operational in early 2020, complements Honour House in New Westminster; Honour House opened in November 2010, and has provided more than 10,000 free nights of accommodation to uniformed personnel and their families while they're in Metro Vancouver receiving medical care.

De Genova, an honoury colonel, was inspired to create Honour House after watching a documentary about Cpt. Trevor Greene of Canada's Seaforth Highlanders. Greene sustained a head injury while deployed in Afghanistan and was transported to Vancouver for treatment.

"I heard about his story. He didn't have a place to stay," De Genova tells KamloopsMatters.

He says too many people fall through the cracks, and eventually take their own life.

A few weeks ago, an RCMP officer approached De Genova to let him know he was looking forward to Honour Ranch opening.

"In tears, he said, 'I've been waiting for this program. I need it. This is my last chance.'"

De Genova says, "It's our turn to look after them, as they look after us, unconditionally."

Having worked with the ambulance service for the last 27.5 years, including 12 in her hometown of Ashcroft, she says Honour Ranch is a welcomed refuge for many.

"You start out in this field, and you see the world as a bright sunny day. The lake is beautiful and everything’s great," she says. "And after a few years of being a paramedic, you see a bright sunny day, and there’s going to be lots of people on the highway, possible (fatal) MVAs happening; in the lake, somebody’s not going to wear their lifejacket and they’re going to drown... We start to view the world differently."

Hodgson adds the hardest part of being a paramedic, besides witnessing a host of traumatic events, is dealing with families.

"When people that die, or commit suicide, or they're murdered, or are in an accident, it affects us because you know this was a person," she says. "This was a human being that had a family and people who cared for them. Because you're with the family, you may get to know a little about them too. And that's the hard part. Being with the mothers, the parents."

Paramedics are usually the ones to remain at the scene until victim services arrive. In rural and remote areas, Hodgson says those services may not exist, and a paramedic may have to stay with a body until the coroner comes.

That work trauma is then taken home.

"Paramedics, police, fire... we try not to burden our families with what we see and do, because we don't want to injure them also.

"As a paramedic, we feel like we have to be strong and handle all this stuff, because it's the job we went into. We're trying to get rid of that stigma, and to reach out and to get help when you need it. Because it's not normal what we see and what we do," she says.